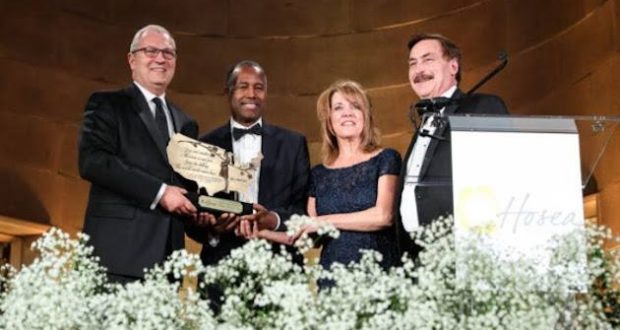 Secretary of Housing and Urban Development Ben Carson (2nd L) receives the 2019 Dr. Bernard N. Nathanson “Courageous Witness for Life Award” on behalf of President Donald Trump, next to Sen. Kevin Cramer (L) (R-N.D.), Terry Beatley, president of Hosea Initiative, and Michael Lindell, CEO of My Pillow, at 'The Life is Beautiful' gala hosted by the Hosea Initiative at the Andrew W. Mellon Auditorium building in Washington on Dec. 8, 2019.

Pro-life organizations have repeatedly said Donald Trump is the most pro-life president in American history. Now, he has been chosen by a major pro-life organization to receive the first Dr. Bernard N. Nathanson “Courageous Witness for Life Award” for his efforts to defend the lives of the unborn.

Housing and Urban Development Secretary Ben Carson received the award on Dec. 8 on behalf of Trump at a gala event hosted by the Hosea Initiative, a pro-life nonprofit organization.

Terry Beatley, founder and president of Hosea Initiative, said the organization selected Trump for his “courage to be able to stand up for the right thing.”

Beatley was inspired by her 2009 interview with Dr. Bernard N. Nathanson, an American medical doctor who was once known as “The Abortion King.” Nathanson later said he made a mistake in leading the pro-abortion cause and became a prominent opponent of the procedure.

Two years before his death in 2011, the doctor told Beatley that he misled American public opinion in the 1970s about abortion, promoting it as “women’s health care.”

Beatley shared her exclusive interview with the doctor in her book “What if We’ve Been Wrong: Keeping My Promise to America’s ‘Abortion King.’”

In 1969, Nathanson co-founded the National Association for the Repeal of Abortion Laws, now called NARAL Pro-Choice America, which advocates for abortion rights. His efforts succeeded with the Roe v. Wade decision that legalized abortion nationwide in 1973.

According to Beatley’s book, Nathanson claimed responsibility for the death of more than 75,000 pre-born babies, including two of his own unborn children. A few months after the Roe v. Wade decision, a new technology, ultrasound, transformed his views on abortion.

“The bombshell was real-time ultrasound. It made everything come alive,” he told Beatley. “I finally came to the conviction that this was my patient. This was a person. I was a physician, pledged to save my patients’ lives, not destroy them. So, I changed my mind on the subject of abortion.”

The doctor later became one of the prominent leaders of the pro-life movement in America and produced the 1985 anti-abortion film “The Silent Scream.”

Speaking at the event, Sen. Kevin Cramer (R-N.D.) said that Beatley’s book has an important message.

“I believe it speaks to a broader audience than just the traditional pro-life” movement advocates, he said.

Since taking office in 2017, Trump has taken several actions to support the pro-life cause. He reinstated the Mexico City Policy, a Reagan-era rule that prohibits U.S. foreign aid from funding abortion centers in foreign countries. He also ended U.S. funding of the U.N. Population Fund, after discovering that the organization supports abortion and forced sterilization in China.

His administration proposed a rule to limit Title X funding from going to any clinic that performs abortions. It also ended funding aborted fetal tissue research.

Americans also believe that “Republican politicians are spending too much time on the issue of abortion, at both the national and state level, especially when compared to Democratic officeholders,” according to the poll.

States across the South and Midwest passed 58 abortion restrictions in the first six months of this year, 25 of which would ban all, most, or some abortions. Meanwhile, state legislatures mostly in the Northeast and West have enacted legislation to protect abortion rights and expand access to contraceptive services.

Speaking at the event, Carson praised pro-life advocates for their courage. He said as a former neurosurgeon, he spent a lot of time working on babies, even premature babies born between 25 and 27 weeks, and “operating all night trying to save their lives.”

“That’s why no one will ever convince me that what’s in a mother’s womb is a meaningless bunch of cells,” he said.