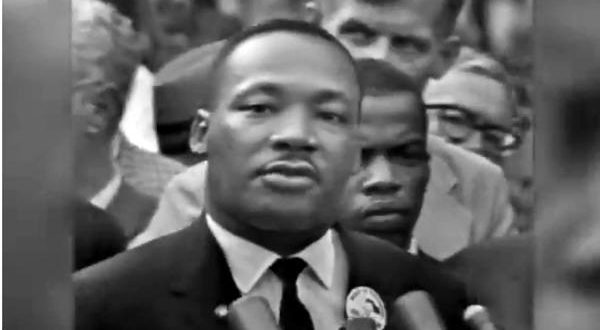 President Donald J. Trump on Wednesday released a video message honoring Martin Luther King Jr. on the 50th anniversary of his assassination, declaring that “the promise he fought for could never be taken away.” In the roughly one-minute video posted to Twitter, the president honored the late civil rights icon and described his work as “uniting” the country.

The president’s message followed a proclamation from the White House Tuesday night calling on Americans to “denounce racism, inhumanity, and all those things that seek to divide us,” themes which were not included in Trump’s Twitter video.

“We must learn to live together as brothers and sisters lest we perish together as fools. We must embrace the sanctity of life and love our neighbor as we love ourselves,” a line from Tuesday’s proclamation adds.

The president nominated King’s niece, Alveda King, to the Frederick Douglass Bicentennial Commission in February. The commission was established last year to plan events honoring Frederick Douglass, a forefather of the abolitionist movement.

The Proclamation in full reads:

Fifty years ago today, on April 4, 1968, the Reverend Dr. Martin Luther King, Jr., was tragically assassinated in Memphis, Tennessee.  Though he was taken from this earth unjustly, he left us with his legacy of justice and peace.  In remembrance of his profound and inspirational virtues, we look to do as Dr. King did while this world was privileged enough to still have him.  We must learn to live together as brothers and sisters lest we perish together as fools.  We must embrace the sanctity of life and love our neighbor as we love ourselves.  As a united people, we must see Dr. King’s life mission through and denounce racism, inhumanity, and all those things that seek to divide us.

It is not government that will achieve Dr. King’s ideals, but rather the people of this great country who will see to it that our Nation represents all that is good and true, and embodies unity, peace, and justice.  We must actively aspire to secure the dream of living together as one people with a common purpose.  President Abraham Lincoln sought to eradicate the senseless divisions of racial hierarchies when he issued the Emancipation Proclamation.  Just over 100 years later, Dr. King continued this effort and called upon Americans to reject ugly impulses and prejudices, and to recognize the beauty and the humanity of all people, regardless of the color of their skin.  Today, we remain steadfast in advancing their efforts, in hopes of hastening the day when all of God’s children will join hands in freedom forever.

NOW, THEREFORE, I, DONALD J. TRUMP, President of the United States of America, by virtue of the authority vested in me by the Constitution and the laws of the United States, do hereby proclaim April 4, 2018, to be a day to honor Dr. King’s legacy.  I urge all Americans to do their part to make Dr. King’s dreams of peace, unity, and justice a reality.

IN WITNESS WHEREOF, I have hereunto set my hand this third day of April, in the year of our Lord two thousand eighteen, and of the Independence of the United States of America the two hundred and forty-second.