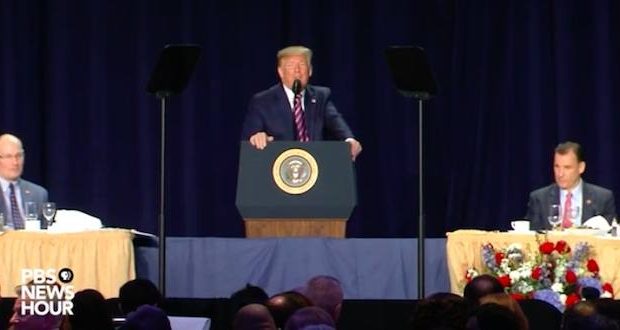 President Donald Trump has had an eventful week, both delivering the state of the union address and then being acquitted of all Democrat impeachment charges. On Thursday, he took time to speak at the 68th annual National Prayer breakfast in Washington, D.C.

“Faith keeps us free, God makes us strong and God alone is the author of life and the giver of grace,” Trump said.

READ: Prayer was central in life of Mr. Rogers

The event is hosted by members of the U.S. Congress and is organized by the Fellowship Foundation, a nonprofit religious organization designed to bring together political, religious and business leaders. The breakfast is held in the International Ballroom at the Washington Hilton. Past speakers have included Mother Teresa, former United Kingdom Prime Minister Tony Blair, and television producers Mark Burnett and Roma Downey.

President Trump spoke less than 24 hours after he was acquitted by the Senate of the impeachment charges brought against him by the Democrat-controlled House of Representatives. This is the second time Trump has spoken at the breakfast. He shared the spotlight back in 2018 with House Minority Whip Steve Scalise (R-La.), who gave the keynote address, sharing a dramatic re-telling about how God intervened when he almost lost his life in a shooting at a congressional baseball practice in 2017.

The National Prayer Breakfast is actually an all-day series of meetings and luncheons designed to build relationships. Every president since Dwight D. Eisenhower has addressed the prayer breakfast’s audience. The annual event is “literally one of the toughest tickets to get in Washington,” Scalise said during his speech in 2018. This is an especially important speech for Trump, given his staunch support among evangelicals.