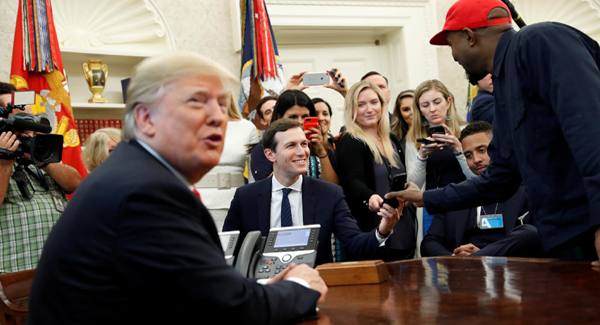 Rap megastar Kanye West doesn’t always have the most clear and concise political message, but one of the biggest takeaways from his recent political comments is that he is tired of liberals telling black people how they should feel.

In the aftermath of Hurricane Katrina, singer Kanye West was among several celebrities who addressed the needs of those hit by the disaster. Within the message was a statement from Kanye that President Bush didn’t “care about black people.”

Since making those remarks, Kanye had publicly apologized to Bush. In his apology, he stated that he had “made mistakes” and had “grown as a person.”

But during his meeting with President Donald Trump at the White House today, the topic came up again, Kanye explained his criticism of Bush at the time as being due to being “programmed.”

His statement was that “I was very emotional & I was programmed to think from a victimized mentality, a welfare mentality.”

Kanye’s experience fits with the narrative many black conservatives express regarding the “Democrat Plantation” and Democrats pushing “victimhood” and “welfare mentality” on them.

Kanye took it even further and addressed how racism ties in with the Democrat Plantation and claims of racism against President Donald Trump. It came up when a reporter at the event asked him about Trump and racism.

“A liberal would try to control a black person through the concept of racism because we know we’re very proud, emotional people. So when I said I like Trump to like someone liberal, they’ll say, oh, but he’s racist.”

“You think racism can control me? Oh, that don’t stop me. That’s an invisible wall.”

According to the Washington Examiner, Kanye went even further with his emotional response, adding hope for black Americans in the form of a solution.

” … as black people we have to take responsibility for what we’re doing. We kill each other more than police officers.”

He also called on various entities to do better and focus on what would really help the black community. His solution included showing respect for the president, and Kanye explained why that mattered.

President Trump mentioned that Kanye “gets it” and his statements show that he does indeed.

And when West spoke to TMZ founder Harvey Levin on last week, he shut down Levin’s attempts at controlling his political opinions — starting with the “Make America Great Again” hat West wore for the interview.

“I would love it, Kanye, if you would not wear that hat,” said Levin. “It would make me and a lot of other people feel better.”

Poor Levin. He was actually at least cordial toward Trump until disagreeing with the president over transgenders in the military, according to Spin. In early August, after Trump tangled with NBA star LeBron James, Levin published a personal tweet that declared “He’s got to go.”

Now, Levin is apparently so sensitive about the president that he actually wanted West to take off his pro-Trump hat in order for his feelings not to be hurt.

The rapper made it clear that he was not going to comply to Levin’s demands.

“As an American, I support our president,” West said.

This is just one example of an elite liberal, like Levin, who has tried to police West’s political messages.

West has been highly critical of leftists for their attempts at “bullying” black people.

“I wanna cry right now. Black man in America, you’re supposed to keep what you feel inside right now. And the liberals bully you and tell you what you can and cannot wear,” West said in an unaired performance Saturday on “Saturday Night Live,” according to People.

West is hinting at something that goes far beyond his Trump hat.

Liberals are trying their hardest to stop black conservatives — and it isn’t just in the United States.

For example, Kehinde Andrews, a sociology professor of at Birmingham City University in Birmingham, England, took West’s political messages as an opportunity to tell black conservatives that they are wrong.

In his piece for the U.K. Independent, Andrews said West “is an advert for the fallacies at the heart of black conservatism.”

What is it that makes liberals so mad when they see black conservatives or black Trump supporters?

Perhaps liberals are upset they are unable to concoct false accusations of racism against Trump when prominent black Americans don a MAGA hat.

Even then, black conservatives face racist comments from liberals like anti-Trump rapper Snoop Dogg, who called West an “Uncle Tom” after his “SNL” performance, according to Breitbart.

‘Gosnell’ is a gripping movie the media wants to ignore