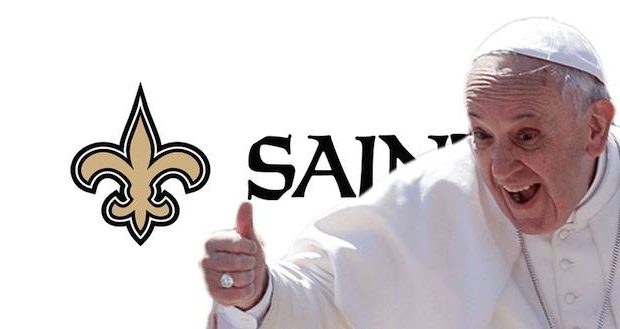 Fans may have prayed for divine intervention over the weekend for their favorite NFL franchise but one team may have gotten some unexpected support. Pope Francis unknowingly gave a shout-out to the New Orleans Saints in their victory over the Jacksonville Jaguars.

The Pope accidentally included the team’s logo in a tweet on Sunday morning to his 18 million followers, Sports Illustrated reported. He actually was tweeting about five new saints who had been canonized earlier that day.

“Today we give thanks to the Lord for our new #Saints. They walked by faith and now we invoke their intercession,” the tweet read. The hashtag and capitalization inadvertently added the Fleur de Lis, the emblem associated with the Saints football team and worn on their helmets. It was widely regarded as a good omen for New Orleans.

New Orleans linebacker Alex Anzalone took it as a positive sign. “Wow, are we blessed or what?!??” he tweeted.

The Saints beat the Jaguars 13-6 despite again playing without starting quarterback Drew Brees, who is an outspoken Christian. Gardner Minshew, Jacksonville’s rookie quarterback, played his worst game of the season a few hours after Pope Francis accidentally tweeted support for the visiting team The Saints held Minshew without a touchdown pass for the first time in six games and limited the Jaguars to a season-low 226 yards.

The Saints retweeted the pope after their fourth consecutive victory, saying, ”Couldn’t lose after this. #Blessed and highly favored.”

The Chiefs, playing without the pope’s blessing, lost 31-24, dropping their record to 4-2.