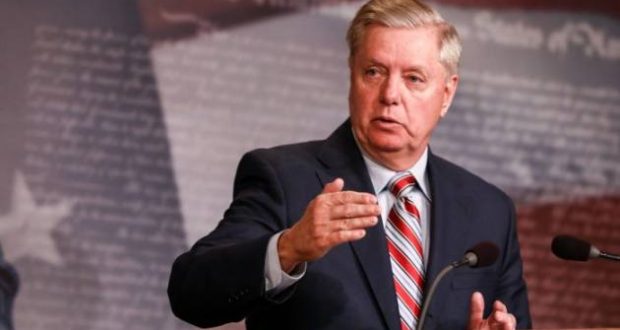 Sen. Lindsey Graham (R-S.C.) invited special counsel Robert Mueller to testify about any potential discrepancies between responses Attorney General William Barr provided during a recent Senate hearing and the contents of a phone call between the two men.

In a letter (pdf) dated May 3, Graham offered Mueller the opportunity to “provide testimony regarding any misrepresentation by the Attorney general of the substance of that phone call” if the special counsel disagreed with Barr’s account of the exchange.

The phone call in question came days after Barr sent a four-page memo to Congress on March 24 containing the bottom-line conclusions of Mueller’s report.

Democrats have charged Barr with lying but those accusations continue to be denied by Mueller himself who pointed his finger at the media.

During a call with Barr, Mueller said that he did not think the attorney general’s summary was inaccurate, but that the media coverage surrounding the investigation was misleading.

He also refused a request by Sen. Richard Blumenthal (D-Conn.) to turn over the notes of the phone conversation with Mueller about the letter, reported the Washington Examiner.

Graham wrote in his letter to Mueller that, “In response to questions by Senator Blumenthal, the Attorney General testified in essence that you told him in a phone call that you did not challenge the accuracy of the Attorney General’s summary of your report’s principal conclusions, but rather you wanted more of the report, particularly the executive summaries concerning obstruction of justice, to be released promptly. In particular, Attorney General Barr testified that you believed media coverage of your investigation was unfair without the public release of those summaries.”

During a press conference on May 1, the Senate Judiciary Committee chairman said he was going write to Mueller and “give him a chance to correct the record if he thought Attorney General Barr in any way misrepresented the findings of his report” but has no plans to bring in Mueller to testify about his investigation, telling reporters, “Enough already. It’s over.”

The existence of the March 27 letter was leaked to the Washington Post and reported on a day before Barr was scheduled to appear at the Senate hearing.

The letter outlined Mueller’s concerns about the content of Barr’s memo:

“The summary letter the Department sent to Congress and released to the public late in the afternoon of March 24 did not fully capture the context, nature, and substance of this office’s work and conclusions. … There is now public confusion about critical aspects of the results of our investigation. This threatens to undermine a central purpose for which the Department appointed the Special Counsel: to assure full public confidence in the outcome of the investigations.”