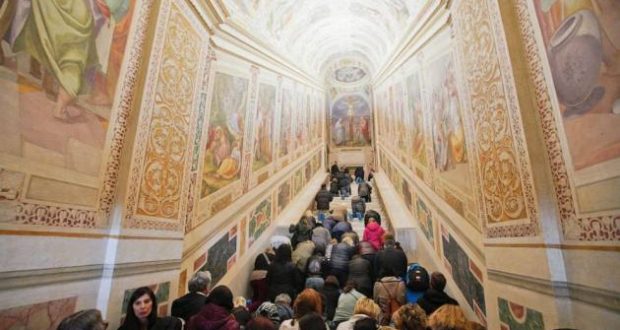 The bare, white marble of Rome’s ‘Scala Sancta,’ which are believed to be the stairs trod by Christ on the day of his trial and death, are exposed and visible to pilgrims for the first time in almost 300 years.

The stairs, encased in wood since the 1700s, are now uncovered until June 9, the feast of Pentecost. During this time, people may ascend the marble steps on their knees.

“We thought this opportunity was important,” Paolo Violini, the head of the restoration of the staircase, told EWTN. He said the idea to open the Holy Stairs to the public came when they removed the wood to restore it and discovered the beautiful white stairs beneath.

“No one had ever thought to be able to climb the marble stairs. It was simply restoration work, maintenance work of the wood covering them,” Violini said.

“The moment we saw what was underneath, the idea came to open them publicly… for the devoted, even for a brief period and for what is possible, obviously, for the conservation of the marble.”

“As long as the restoration of the wood is not finished, and it is not covered, it will be possible on the part of the faithful to climb to the top on one’s knees,” he said. 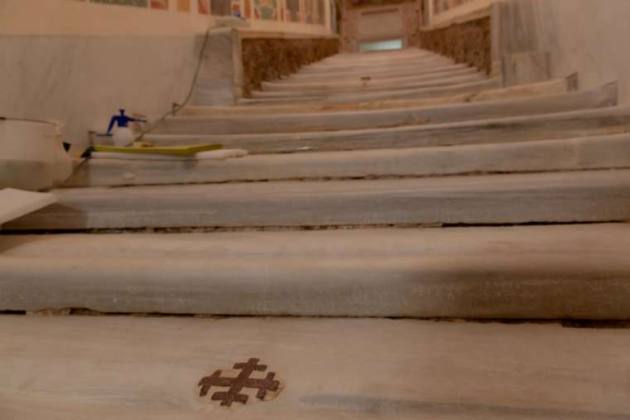 The Holy Stairs are thought to be those which led to the praetorium of Pontius Pilate in Jerusalem, and which Christ would have ascended on his way to the trial before his Crucifixion.

In the 4th century the stairs were brought to Rome by Helena, the mother of Constantine the Great. She restored many sites in the Holy Land and discovered many sites and relics. 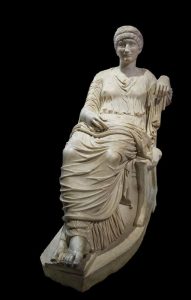 Helena, mother of Constantine, brought the stairs from Jerusalem to Rome.

The stairs, which are near the Archbasilica of St. John Lateran, were first opened to the public more than 400 years ago.

In 1724, Benedict XIII covered the Holy Stairs in wood for their protection, since the marble had already begun to be worn down significantly by pilgrims over the prior century, Violini explained.

The marble under the wood has not been seen since then, he stated, and their “re-uncovering” during the end of Lent and Easter is a “high point.”

The Holy Stairs have been closed for over a year for restoration of the frescoes on the walls surrounding the steps and leading up to a once-private papal chapel, the Church of St. Lawrence.

The renewal of the wooden planks over the stairs was the final step.

But when the restoration workers removed the wood, they found deep divots in the center of the steps. “It was a surprise for all of us to see the state of conservation of these steps, with this central consumption, which digs a rather deep furrow, to the point that for some of the steps the whole depth is consumed,” Violini noted.

“But, going forward with the uncovering of the steps, we realized that it is nothing more than a sign of the use, of the consumption, of the pilgrims who went up on their knees,” he explained. “The furrow in the center was caused by the tip of the shoe that, resting on the step below, served to give the push to climb the next step.”

Before being removed, the wood encasing the steps had squares cut out where pilgrims could reach down to touch the marble. There were also glass cases protecting spots believed to have marks of the bloody footprint of Christ.

Pilgrims who visit the stairs must ascend them on their knees as a sign of piety and reverence but can choose how they wish to pray while doing so. Those who cannot climb on their knees may kneel on the first step and then walk up one of the other staircases to reach the top.