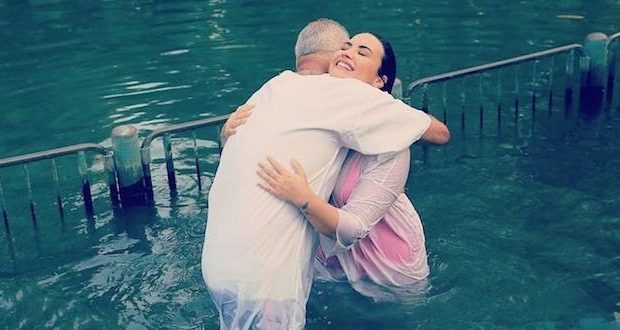 Lovato being baptised in the Jordan River.

Singer Demi Lovato, who will sing the national anthem before Sunday’s Super Bowl, recently said her relationship with God has allowed her to overcome personal challenges, including a near-fatal drug overdose, according to CBN News.

During an interview on Apple Music’s Beats 1, the 27-year-old said that when she is struggling, she leans on her faith in God for hope.

“When I’m going through a rough time, I look toward the future for hope to change my perspective on things,” she said. “When I go through something difficult, I stop and I think, `Why is God putting me through this? Sometimes it doesn’t make sense in that moment.”

Lovato revealed that her new song, “Anyone,” was written and recorded just before her drug overdose in July 2018. The song details how Lovato felt at the time, confessing that the “lyrics were a cry for help.” The song tells a sad story about her emotional journey with substance abuse and loneliness.

She performed the song at the 2020 Grammy Awards last Sunday. It was her first public performance in two years. Lovato was moved to tears during the performance and had to restart just seconds into the song. She received a standing ovation from the Los Angeles Staples Center audience at the end.

The singer is still healing from her past experiences but has shared that she has found peace attending church and through spending time with her family.

This is the first time for the singer to perform the national anthem at the Super Bowl.