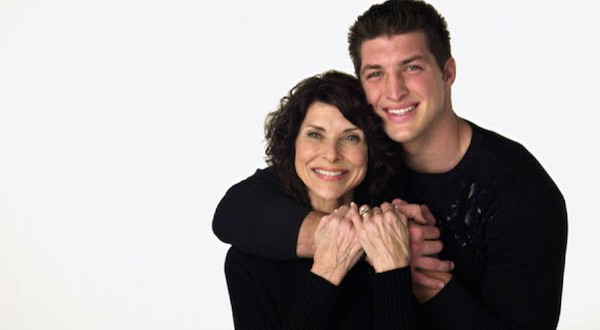 Tim Tebow’s Mom to Speak May 30

Pam Tebow, mother of Heisman Trophy winner and NFL Quarterback Tim Tebow, will be the guest speaker Saturday, May 30 at 7:00 p.m. at the Ottawa Municipal Auditorium, 301 S. Hickory Street, Ottawa, Kan. The event is free and open to the public; however, seating is limited. Registration for tickets to the event is strongly encouraged at www.lifecarecenter.org/upcoming-events.

Tebow will be the keynote speaker for the annual fundraising event for LifeCare Center, a Franklin County pregnancy resource center located in Ottawa since 1993. During the event, she will share the on-going impact of her decision not to abort her son.

Tim Tebow recently provided words of wisdom to the youth at Sheridan High School in Sheridan, Wyo. for a K-Life ministry event where he opened up about peer pressure.

Tebow, the 27-year-old former Heisman Trophy winner-turned-ESPN football analyst, spoke to the youth in the K-Life ministry, a Christian interdenominational ministry for youth and their families. Tebow answered questions about various topics concerning the youth.

One of those topics touched on peer pressure, which Tebow had some unique insight about. According to the Christian athlete, giving in to peer pressure puts people at risk of being nothing more than average. “Do I want to be average, or do I want to be special? If everyone is going one way, am I’m gonna make a choice to follow that?” Tebow questioned at the event, according to The Sheridan Press.

“Why? Because if I’m like everyone else, then I’m average.” The athlete reflected on being young and choosing to stand out from the crowd. “For me, when I was young, even if it wasn’t right, I chose to be different because if you’re different you at least have a chance to be special. â€¦ It is OK to be different,” Tebow said.

“Yeah, you might be criticized every now and then but you’re also going to be respected.” He went on to warn students against having the mentality of wanting to bypass the school week to enjoy themselves during their weekend breaks.

“When you choose to love every day, and be excited about it, and sacrifice to be the best that you can be, people are going to look at you and say, ‘Wow, that’s different, that’s exciting and that’s contagious,'” Tebow said.

Tebow recently took his brand of inspiration on a six city speaking tour. Tebow has been vocal about creating a humanitarian legacy and spoke to People magazine about his goal last year. “I hope that when I’m 90 years old, I’ve accomplished a legacy that isn’t all about me. I hope it’s a legacy about the people who our foundation helps,” Tebow previously told People magazine.

“We’re about to open a hospital in the Philippines. We’ll have this hospital where we can help kids who are hurting; healing them physically, but encouraging them emotionally and spiritually as well.” Tebow’s mother, Pam, will speak at a free event open to the public on May 30

“We are thrilled to have Pam share her story with the Ottawa community,” says LifeCare Director Leah Wray. “Tim is a living example of what happens when a mom chooses life and of the potential that every unborn baby has. LifeCare exists so every baby in Franklin County has that same chance at life.”

Pam and her husband Bob have been called “homeschool pioneers.” They began homeschooling in 1982, when “homeschool” was not yet a word. All five of their children were homeschooled from kindergarten through high school.

The notoriety of the Tebow family increased when their youngest son, Tim, won the Heisman Trophy following his sophomore football season with the Florida Gators. Because ESPN aired the portion of the interview with Pam that focused on her refusal to abort “Timmy” when she was advised to do so, she has been given a national platform to encourage the pro-life message. In 2010, Pam and Tim were in a Super Bowl commercial that celebrated family and life, which, according to a Barna survey, resulted in 5.5 million people “having cause to rethink their stand on abortion.”

Also being featured at the May 30 event is the up and coming contemporary Christian recording artists Eternity Focus.

2015-05-05
Dwight
Previous: 10 Speakers in 2 Days That Will Change Your Life
Next: Life Inspires Lyrics for Grandeur Band