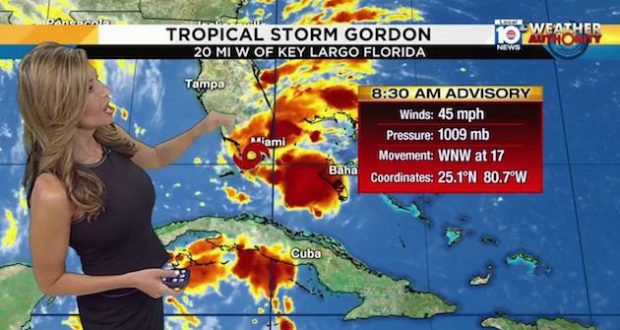 Gordon is currently battering South Florida with an expected track to take it over Kansas City as a tropical depression.

Tropical Storm Gordon is expected to cross the Gulf this week, making a beeline straight for Kansas City.

The National Hurricane Center issued a tropical storm watch on Sunday for parts of the Gulf Coast as it brings heavy rains and strong winds to South Florida and was expected to make landfall in Alabama on Tuesday into Wednesday. 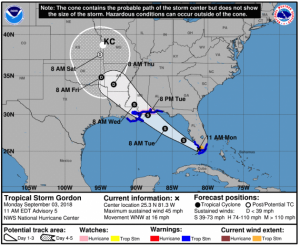 “This rainfall may cause flash flooding,”  along with strong winds and damaging waves the Miami-based National Hurricane Center said. It has also issued a tropical storm watch for the New Orleans area and a flash flood watch for large parts of the Louisiana coast into the Houston area.

A storm surge watch is in effect for the Mississippi-Alabama border, westward to the mouth of the Mississippi River, officials said in an alert at 11 p.m. Sunday.

Louisiana Governor John Bel Edwards said on Sunday he had activated the state’s Crisis Action Team as a precaution.

The storm is then expected to move north through Arkansas and up the Missouri/Kansas State line directly towards the Kansas City metro area.

Kansas City meteorologist Gary Lezak says that the storm will approach KC from the southeast before moving into eastern Kansas. Lezak says it may end up further west of the predicted track and that forecasters are monitoring the storm track and impact on Kansas and Missouri very closely.

The storm could bring more than just relief to drought-stricken areas of northern Missouri. Up to 8 inches of rain could fall in some areas causing severe flooding. An area from Topeka through Kansas City to Kirksville, Mo. could see anywhere from 1-6 inches of rain with some forecasters saying some isolated spots could see 8 inches of rain.

A front just west of Kansas City has been stalled for several days forcing rain to move over the same spots since Saturday. Flooding has been recorded in areas of Kansas, Nebraska and northern Missouri. Gordon is expected to make the situation worse.

“This European Model shows an increase in rainfall over eastern Kansas and western Missouri. There are a few spots left that are still in drought conditions and this may be the week that finally wipes the drought out,” stated Lezak on his blog.

Forecasts for the area over the next few days include:

Previous: Brazil’s “Smithsonian” considered total loss in fire
Next: Dave Says – You must pay a price to win