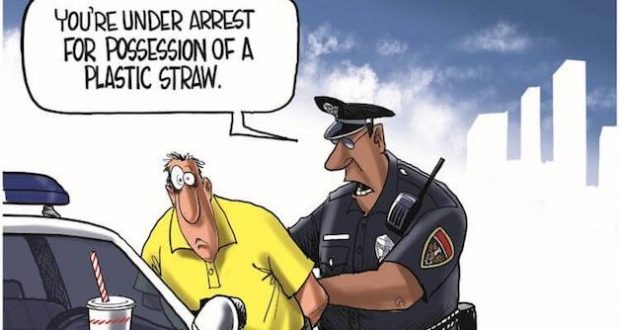 The campaign to re-elect President Trump is having some fun at the expense of the push to ban the straw. And that fun has found a receptive ear among Americans tired of everything seemingly being banned.

The move to ban straws actually started, not with scientific evidence of their destructiveness to the environment, but rather with calculations taken from an elementary school science project. That dubious contention states that straws are the seventh most common trash items and they can’t be recycled. After the media began promoting the bad science project, cities in left-leaning states and well-meaning restaurants everywhere else began banning them. This month the city of Seattle banned plastic sipping straws.

Many other US cities, as well as cities and countries around the world, are making efforts to ban the straws, and a large food service company called Bon Appétit announced plans to switch to paper straws by September 2019.

All because of an unproven science project thrown together by a kid in fourth grade that made huge assumptions.

“Plastic pollution in the ocean is a real problem, but only about 1 percent of it comes from the U.S. Of that 1 percent, only a tiny fraction comes from plastic straws. How can that be? Celebrities tell us Americans use 500 million plastic straws every day. “Polluting water and killing sea life,” according to actor Adrian Grenier.”

The magazine goes on to say that the “500 million number is repeatedly used by the media. But it comes from a nine-year-old’s school project. The real number is much less—closer to 175 million.”

But the media doesn’t want to hear the facts but the Trump campaign is ready to make the facts available.

Trump Campaign Manager Brad Parscale said in a tweet that he’s “so over paper straws. #LiberalProgress.”

He said paper straw replacements for plastic straws are a picture of what liberals would do to the US economy: “Squeeze it until it doesn’t work.”

Now Parscale has announced in a tweet that the campaign sucked in over $200,000 selling over 140,000 reusable plastic straws.

For the president, banning plastic drinking tubes may be the last straw… or maybe not.

When a reporter asked if he’s in favor of banning plastic straws, Trump replied, “I do think we have bigger problems than plastic straws.”

“You know it’s interesting about plastic straws. So, you have a little straw, but what about the plates, the wrappers, and everything else that are much bigger, and they’re made of the same material? So, the straws are interesting. Everybody focuses on the straws. There’s a lot of other things to focus. It’s interesting. It’s an interesting question,” he said.

Previous: U.S. to bar entry of Chinese officials involved in persecution
Next: Want to see your church or charities get 30%-60% more money?