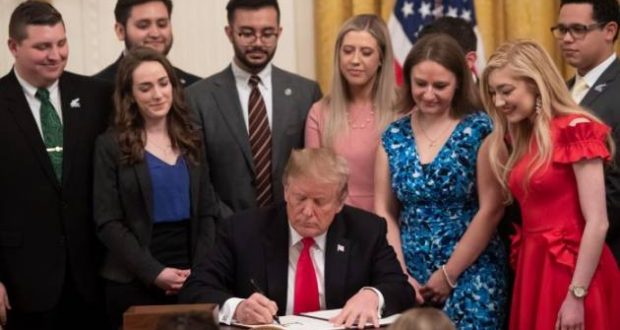 President Donald Trump signs an executive order to protect free speech on college campuses during a ceremony in the East Room of the White House in Washington, March 21, 2019.

March 21 may go down as a watershed moment for free speech in America. With the swoop of a pen, the leader of the free world has rebuked the nation’s entire university education system for stifling conservative and Christian speech.

President Donald Trump signed an executive order on Thursday instructing colleges across the nation to protect free speech on their campuses — or else risk losing federal research funding which is currently over $30 billion per year.

An estimated 150 people were in attendance, including Secretary of Education Betsy DeVos, and Secretary of Health and Human Services Alex Azar. A group of students stood next to Trump on stage. The president said the day’s signing was the first in a series of steps to “defend students’ rights.”

Trump said he would give his support to all college students who’ve had their First Amendment rights taken away from them.

“You refused to be silenced by powerful institutions and closed-minded critics, of which there are many,” he said.

“You faced down intimidation, pressure, and abuse, you did it because you love your country and you believe in truth, justice, and freedom.

The order directs 12 federal grant-issuing agencies to ensure that schools are abiding by the First Amendment. The White House Office of Management and Budget also will work to ensure institutions that receive the grants “promote free inquiry through compliance with all applicable federal laws, regulations, and policies,” a senior Trump administration official told reporters on a March 21 conference call.

The idea was first proposed by Trump during a speech earlier this month at the annual Conservative Political Action Conference in National Harbor, Maryland. Trump talked about the many incidents in recent years of conservatives being silenced on campuses, bringing up on stage Hayden Williams, a conservative activist who was recently punched in the face at the University of California–Berkeley as he was recruiting for Turning Point USA.

In addition to hundreds of incidents of conservative speech being quenched, speech by Christians has also been stymied to the point where many believers are afraid to express their views. The order is seen as protecting both.

On March 21, Trump said colleges have become increasingly hostile to free speech and the First Amendment. “You see it all the time,” he said, referring to Williams’s assault. “You see people being punched hard in the face. But he didn’t go down.”

The debate surrounding the silencing of conservative voices on campuses has ramped up in recent years due to a number of high-profile cases in which conservative speakers were heckled or forced to cancel their events at colleges such as UC Berkeley and Middlebury College in Vermont.

The presidential order applies to certain education grants and won’t affect federal financial aid that covers tuition and fees for students. Specifics on how the federal government would enforce the order were not given by the senior official, who said the details would be figured out in the next few weeks and months.

Public colleges and universities already are legally bound to uphold the First Amendment. The senior official said that the order would be broader than the current free-speech protections already in place, but didn’t go into specifics. Private colleges, meanwhile, will be required to “comply with their stated institutional policies regarding free inquiry,” the official noted.

Trump said his policy will send a powerful message to “professors and power structures” that want to keep young Americans and the general public “from challenging rigid, far-left ideology.”

The executive order will not just give a voice to conservatives, but help to fundamentally change the culture on campuses, Anna Paulina, the director of Hispanic engagement at Turning Point USA, told The Epoch Times in a phone interview.

Paulina said that campus administrators will now have to make a decision. “They are going to think twice about it, they are not going to be able to enforce the same policies as they were before,” she said. “That funding is something that these colleges take very seriously.”

“A lot of the time, it will come from their professors having reactions to them wearing pro-Trump hats or different clothing items. Many students complain that their grades are directly impacted if they speak out,” she said. “They are bullied not only by professors, but by other students.”

Paulina said she herself has been afraid at times to visit campuses because of the number of protests from radical groups, and that she has been “personally slandered” by campus organizations. Faculty members have tried to remove Turning Point USA’s members from public property and have even threatened to have them arrested.

“I could only imagine what being a student at these universities would be like,” she said.

Paulina believes the new executive order will help restore respect and dialogue to educational facilities across the country, regardless of people’s different views.

“I think what [Trump] is doing is really for the future of America, establishing a precedent in that you might not have the same ideas but you can’t punish someone because they differ ideologically from you,” she said.

“It will allow people to express themselves and really reestablish the dialogue that we lost on our college campuses.”