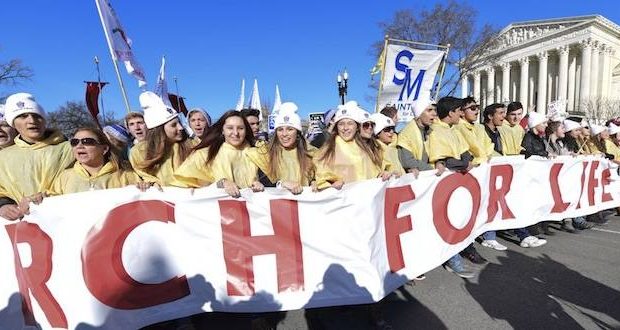 President Donald Trump will become the first president to address in person the annual March for Life in Washington D.C.  The announcement came Thursday evening and was quickly praised by pro-life groups across the nation including the country’s largest–National Right to Life.

Trump will speak before hundreds of thousands of marchers gathered on the National Mall. Trump has been called the most pro-life president in American history by leaders spanning a wide range of pro-life, adoption and foster care organizations.

“We are deeply honored to welcome President Trump to the 47th annual March for Life. He will be the first president in history to attend and we are so excited for him to experience in person how passionate our marchers are about life and protecting the unborn,” said March for Life president Jeanne Mancini in a statement released late Wednesday.

In previous years, Trump has offered a well-received message for the march and his appearance this year could make this the biggest event ever.

The march takes place Friday, January 24 in the nation’s capitol and will be broadcast live on various Christian television stations. The march and accompanying rally regularly draws several hundred thousand pro-life individuals with many churches bringing members in church buses. Estimated turnout for the 2013 event was about 650,000. The annual trek along the National Mall to the U.S. Capitol is the most visible symbol of March for Life’s vision: “a world where every human life is valued and protected.”

The march was begun 45 years ago by Nellie Gray, a  Department of Labor attorney. Gray ended up founding the March for Life Education and Defense Fund—is responsible for organizing the world’s largest annual pro-life rally.

Support for the cause has grown immensely since the first “Circle of Life” march in 1974. Trump’s appearance and speech is an indication of the strength of the pro-life cause, say many observers.

“From the appointment of pro-life judges and federal workers, to cutting taxpayer funding for abortions here and abroad, to calling for an end to late-term abortions, President Trump and his administration have been consistent champions for life and their support for the March for Life has been unwavering. We are grateful for all these pro-life accomplishments and look forward to gaining more victories for life in the future,” Ms. Mancini said.

House Minority Whip Steve Scalise of Louisiana and Rep. Chris Smith, New Jersey Republican, are also among the many speakers for the event.

President Trump and Vice President Mike Pence joined this year’s event via video satellite from the White House Rose Garden. The Vice President also hosted a round-table discussion with leaders from Students for Life the evening before the rally.

“Today, we focus our attention on the love and protection each person, born and unborn, deserves regardless of disability, gender, appearance, or ethnicity,” President Trump said. He also proclaimed January 22, 2020, as National Sanctity of Human Life Day.

For the past year, the Trump Administration has sought to change the conversation and policy landscape surrounding abortion. Last April, the President signed legislation that overturned an Obama Administration rule that prohibited states from defunding abortion service providers. Vice President Pence cast the tie-breaking vote in the Senate.

Weeks later, the Vice President attended a gala for the Susan B. Anthony List Campaign for Life. “For the first time in a long time, America has an administration that’s filled top to bottom with people who stand without apology for life,” Vice President Pence said. “In his first week in the Oval Office, President Trump reinstated the Mexico City Policy, preventing taxpayer-funded foreign aid from paying for abortion or promoting abortion beyond America’s borders.

While the Administration pushes forward on the policy front, March for Life is a reminder of the power of a positive pro-life message in confronting what for many is a difficult subject.

“The mission of the March for Life is to provide all Americans with a place to testify to the beauty of life and the dignity of each human person,” the organization’s mission statement reads. The goal is “to communicate this message to the government, the media and the nation in a way that is powerful and life affirming.”

Previous: Chinese city under quarantine as virus spreads around the world
Next: Sweet vocals of youngest performer is true Golden Ticket of Charlie and the Chocolate Factory