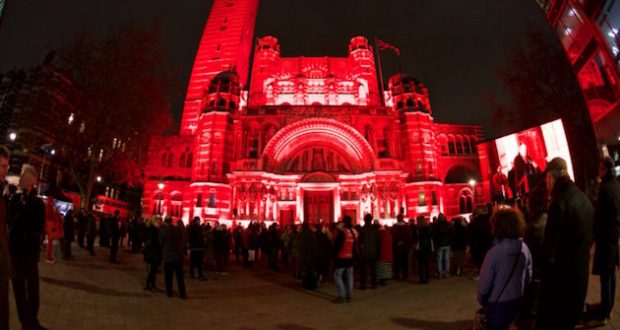 Parliament, churches light up red to raise awareness for martyred believers being persecuted around the world.

(WNS)–On Nov. 22, the British Houses of Parliament and more than 30 churches and schools, mostly in the U.K., bathed their buildings in red light to bring attention to the worsening problem of Christian persecution around the world.

The initiative was part of Red Wednesday—the second annual centerpiece of Aid to the Church in Need’s efforts to remember the most persecuted religious group in the world. Special services and vigils also were held throughout the week. Aid to the Church in Need (ACN) urged people to wear red, the color of martyrdom, and post photos on social media using the hashtag #RedWednesday.

Speakers of the House of Commons and House of Lords agreed to participate in Red Wednesday after constituent pressure, according to ACN.

Getting involved in #RedWednesday were students from throughout the UK including Cumbria, North Ayrshire, Glasgow, Surrey and Cambridge, as well those from various institutes in London.

Meanwhile, a red bus emblazoned with the #RedWednesday slogan – “Stand Up for Faith and Freedom” – toured central London. It stopped at iconic venues, including St Paul’s Cathedral, St Martin in the Fields, Trafalgar Square and Lambeth Palace.

The bus’s final destination was a floodlit Westminster Cathedral.

“We all need to get behind #RedWednesday—we need to stand together against violence carried out in the name of religion—we need to speak up about regimes which persecute people of faith,” one citizen who lobbied his lawmaker told ACN.

ACN’s Patricia Hatton said that Red Wednesday is designed “to wake up the Christian community to the nature and scale of Christian persecution today, especially in the Middle East, and to call for prayer and practical support for all who need our help.”

Previous: The Case for Thanksgiving
Next: Sexual harassers a big problem in Congress