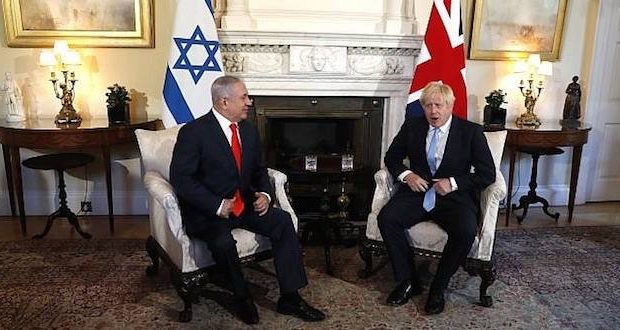 Johnson says Parliament will pass legislation later this week that will present a major blow to the anti-Israel Boycott, Divestment and Sanctions (BDS) movement against Israel, The Jerusalem Post reports.

While speaking at the International Institute for Strategic Dialogue’s conference in Jerusalem on Sunday night, UK Special Envoy for post-Holocaust issues Eric Pickles said the law would make it illegal for public institutions to join or support the BDS movement against Israel in any way.

“BDS is anti-Semitic and should be treated as such,” Pickles said.

Johnson criticized the BDS movement in 2015, telling the BBC he could “not think of anything more foolish than to say that you want to have any kind of divestment or sanctions or boycott against a country that, when all is said and done, is the only democracy in the region.”

Queen Elizabeth II will mention the anti-BDS law as one of Johnson’s legislative priorities during the Queen’s Speech to be given on Thursday.

The speech is traditionally given to the nation by the reigning monarch at the opening of parliament. It is written by her ministers and outlines the government’s agenda for that year.

READ: Join Metro Voice on a tour of Israel in June 2020

The anti-BDS law will become a reality thanks to Johnson’s victory over the left-wing Labour party last week.

Labour party leaders have repeatedly been accused of anti-Semitism and the party said in its manifesto that if elected, it would “immediately recognize the State of Palestine” and stop selling weapons to Israel.

“The National Council emphatically condemns all kinds of anti-Semitism, including Israel-related anti-Semitism, and calls on the federal government to confront these tendencies resolutely and consequently,” the resolution states.

Germany passed a similar resolution in May that rejects BDS and compares it to the policies of Nazi Germany.

Previous: Town collects more Operation Christmas Child boxes than their population
Next: Church of Scientology in Kansas City offers Christmas display despite not believing in Jesus