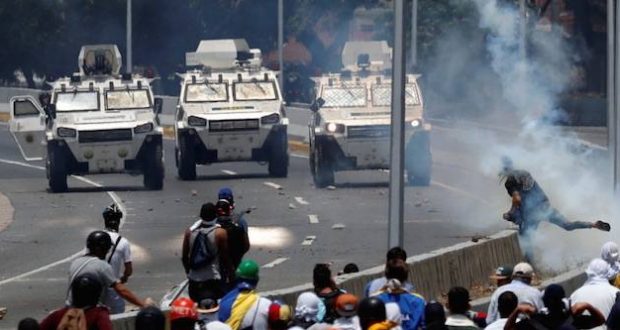 US in secret talks with Venezuelan political boss to remove president

The US is negotiating in secret talks with Venezuela’s socialist party boss to get him to agree to remove dictator Nicolas Maduro from power. Venezuela has been in a state of freefall for months as desperate residents flee the country and even basic necessities are scarce.

A senior administration official says the US has held talks through an intermediary with Diosdado Cabello who is considered the most powerful man in the country after Maduro.

The official spoke anonymously since they are not authorized to communicate on these preliminary discussions. It is unclear whether Maduro approved of the discussions or not.

The mediator reportedly discussed guarantees for Maduro’s inner circle and wants to be sure they won’t face prosecution for alleged crimes if they surrender to demands to remove Maduro.

Maduro, who has the backing of Russia, China and Cuba, has refused to step down following months of demonstrations and pressure from the United States and more than 60 countries.

The head of Venezuela’s secret police wrote a letter saying he was no longer supporting dictator Nicolas Maduro, but it doesn’t appear to have shaken the dictator’s support from other officials.

Maduro became president in April 2013 after the death of his predecessor Hugo Chávez. During that time, the economy descended into chaos, causing many Venezuelans to blame Maduro for the country’s collapse.

He returned to a second term in May 2018 after divisive elections which opposing parties rejected as questionable.

Metro Voice previously reported  on Venezuelan opposition leader Juan Guaido taking to the streets with activists and some heavily armed soldiers calling for the military to rise up and overthrow Maduro.

Guaido is the head of the Venezuelan National Assembly and is recognized by dozens of countries – including the US – as Venezuela’s true interim president.

The Associated Press reports Diosdado Cabello has been accused by US government officials of involvement in corruption, drug trafficking and even death threats against a sitting US senator.

“Cabello is one of the worst of the worst inside of Venezuela,” said Fernando Cutz, a former senior national security adviser on Latin America. “If the strategy is to try to negotiate with the mafia boss, he’s your guy. But that’s a strategy that carries some heavy risks,” he added.