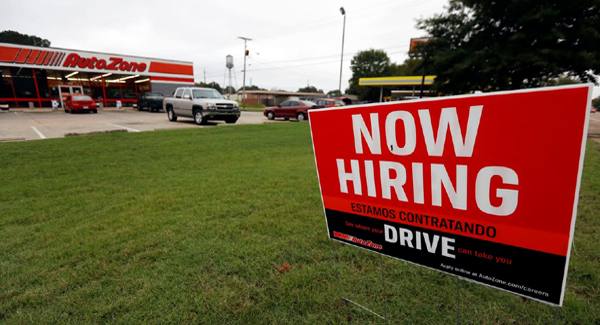 US unemployment rate falls to 49-year low of 3.7 percent

The booming Trump economy continues as the GOP tax cuts and deregulation continue to have a huge effect. The U.S. unemployment rate fell to 3.7 percent in September, the lowest level since December 1969, as the longest streak of hiring on record has put millions of Americans back to work since the Great Recession.

The ultra-low jobless rate reflects a healthy economy driven by strong consumer and business spending. In fact, hiring is so strong that employers are having trouble filling openings and some are being forced to offer higher pay.

The Labor Department says employers added 134,000 jobs last month, despite the effects of Hurricane Florence. The storm struck North and South Carolina in the middle of September and closed thousands of businesses.

The nation saw a sharp drop in new hires last year after Hurricanes Harvey and Irma, almost snapping the record-setting streak of years of continuous job growth. But the economy quickly bounced back, and areas hit by storms were soon drawing lots of construction workers to aid in rebuilding.

Data for July and August were revised to show 87,000 more jobs added than previously reported. So far this year, monthly job growth has averaged 208,000, compared with 182,000 last year.

“The 3.7 percent unemployment is definitely exciting, but it’s not the full story,” said Martha Gimbel, research director at Indeed.com’s Hiring Lab. “Part of what we all care about is not just the low unemployment rate, but that people are employed in good jobs and that they can get the hours they want.”

“We are almost there, but I do think there’s still room for improvement,” Gimbel said.

US consumer confidence rises to 18-year high in September

Previous: Dave Says – The numbers don’t lie
Next: LIFE LESSONS FROM A LITTLE ONE – “Even when it hurts”