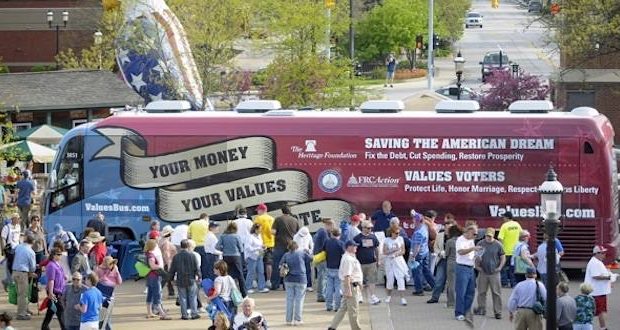 The Values Bus makes a stop in the Kansas City area Nov. 5 in an effort to get out the Christian vote. The bus comes to Lee’s Summit, MO tonight at 5 p.m. at Frontier Justice, 800 NE Jones Industrial Drive, Lee’s Summit. Congresswoman Vicki Hartzler will be in attendance.

The Values Bus is driving across the nation to encourage and equip voters to vote their values on Nov. 6.

The bus tour is organized by FRC Action and is designed to raise awareness about the critical issues at stake in this election, which include the future of the Supreme Court, religious freedom, parental rights, sanctity of life, and limited government.

“The mission of the Values Bus, as it travels across the country, is to share this message: for America to be strong we must commit to pray, to vote, and to stand,” stated Family Research Council Action President Tony Perkins. “We make no apologies for wanting to see a strong America because when America is strong, the world is safer and more secure.”

There is tremendous importance in the thousands of races on the ballot this year at the federal, state, and local levels. The Values Bus will cover several key states, and rally with Values Voters.

An estimated 39 million Christians did not vote in 2012 and about 26 million of them were already registered. While the numbers improved in 2016, millions still did not vote. FRC is working to educate and mobilize these voters.

The Values Bus Tour is a project of FRC Action, the legislative affiliate arm of Family Research Council fighting for the American family. FRC Action was founded in 1992 to educate the general public and cultural leaders about traditional American values and to promote the philosophy of the Founding Fathers concerning the nature of ordered liberty.

“The path to a strong America requires first God’s help. Together as a nation we must seek God. We need to pledge to pray, to vote on November 6th, and to stand. This is a pledge that never expires, it is a pledge to always stand for the values that made America great,” stated Perkins.