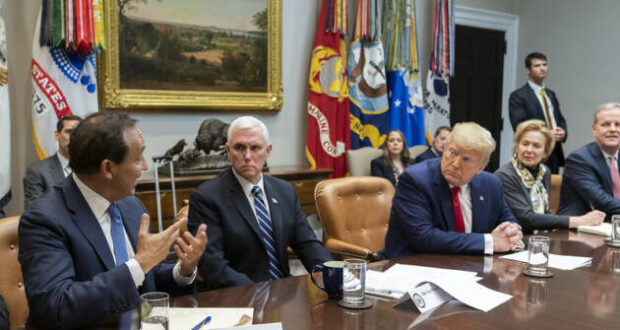 Vice President Mike Pence reiterated on March 4 that the risk of contracting the novel coronavirus COVID-19 in the United States remains low while urging Americans to take extra precautions to avoid the virus.

“To be clear, if you are a healthy American, the risk of contracting the coronavirus remains low,” Pence said during a press conference at the White House.

“But it is still a good idea to engage in commonsense practices that are always recommended this time of year.”

“It’s a good idea to stay home when you’re sick. Avoid close contact with people who are sick. Avoid touching your eyes, nose, and mouth,” he added.

California reported their first death from the virus, raising the U.S. death toll to 11 on Mar. 4. That’s an amazingly low number in a country of over 320 million citizens.

“We have more than 100 coronavirus cases in the United States,” Pence said. “That is counting domestic cases and cases of coronavirus of Americans that were returned from China or the Diamond Princess.”

The White House Coronavirus Task Force, led by Pence, met with airline industry executives on Mar. 4 to get more data on airline passengers exposed to the disease.

“If a person is tested as positive for the coronavirus, we’re working with the airlines to get all the information not just about that person, but about who they sat next to and who else was on the flight,” Pence said.

He said he would also meet with cruise line executives in Florida on Saturday.

The Trump administration ordered sweeping travel restrictions to prevent the spread of the disease, barring all foreign nationals who have been to China in the past 14 days from entering the United States. At the time he was criticized by Democrats, including Senate minority leader Chuck Schumer. Schumer and others have since deleted their tweets that called the President’s actions “racist’ and unwarranted.

The administration later expanded the existing ban on travel from Iran in response to the increasing number of coronavirus cases in that country.

And as of Mar. 3, the administration fully implemented a screening process for travelers from Italy and South Korea. Passengers coming to the United States from all airports in South Korea and Italy are now subject to multiple screenings before boarding a plane.

Pence said, based on the data collected from other countries that are most affected, “it does appear that the elderly are most vulnerable, especially those with serious health issues.”

Consequently, the Center for Medicaid and Medicare Services issued new guidelines to protect the nation’s seniors. The new measures include limiting visitors to nursing homes.

“Reassuringly, in South Korea, no one has died under 30,” said Ambassador Debbie Birx, the White House coronavirus response coordinator, during the press briefing. “And the median age in Italy was 81, of those who succumbed. Those who became ill, the median age was 60.”

The task force has also ramped up efforts to expand the country’s testing capacities, which are critical to detecting and fighting the virus.

“Now all state laboratories, all university laboratories at the state level, can conduct coronavirus tests without any additional assets or resources from the federal government,” Pence said.

“But our objective, ultimately, and as quickly as possible, is to have tests made through these commercial laboratories and commercial providers so that your local doctor, your CVS, your MedCheck is able to have a coronavirus test. And that isn’t there yet; we’re working to make that a reality.”