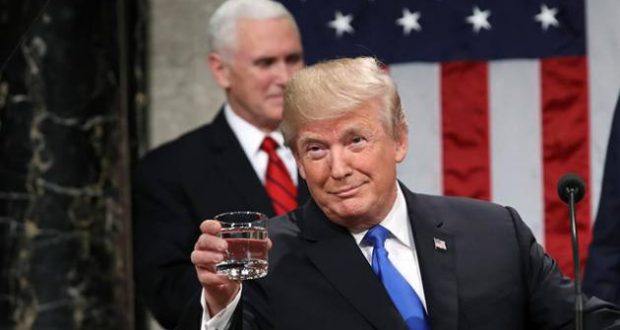 Polls taken immediately after the State of the Union speech show broad approval for the President’s themes. A CBS News poll showed 73 percent of Americans liked the tone of the speech and were encouraged by the President’s message.

Anticipation for the annual speech ran high, with the address wedged between a record-setting government shutdown and the prospect of another a mere 10 days away.

The White House cast the theme of the speech as “Choosing Greatness,” and Trump appealed to both sides of the aisle in his opening remarks.

The audience at the Capitol—composed of almost all members of Congress, Supreme Court justices, the president’s Cabinet, and guests—regularly broke out in raucous cheers. A chant of “U-S-A” broke out when Trump said: “Ladies and gentlemen, the state of our union is strong.”

Trump heralded his economic successes over the past two years, including the creation of 5.3 million jobs. The president pointed to tax cuts enacted in 2017 and the thinning of regulations as the main drivers of growth.

He stressed the importance of putting America first in trading relationships.China is the biggest trading headache for the administration, and the president has taken a tough stance against the regime. A new round of tariffs will be triggered if China fails to secure a deal by March 1.

“We are now making it clear to China that after years of targeting our industries and stealing our intellectual property, the theft of American jobs and wealth has come to an end,” Trump said.

HOW DID VOTERS RESPOND TO THE SPEECH?

The president urged Congress to pass the United States, Mexico, Canada Agreement (USMCA), which is an overhaul of the North American Free Trade Agreement, a deal Trump lambasted as a “historic trade blunder.”

The president also promoted the passage of the Reciprocal Trade Act, which mandates a tit-for-tat tariff system that would make it easier to charge matching tariffs.

A big bipartisan win for Trump was the signing of a landmark criminal-justice reform bill dubbed the “First Step Act,” on Dec. 21, 2018.

The bill gives judges more discretion when sentencing drug and lower-level offenders, while also working to reduce the recidivism risk of prisoners by expanding on programs such as job training.

One of Trump’s guests at the SOTU was Alice Johnson, whom Trump granted clemency on June 6, 2018. Johnson had served almost 22 years of a mandatory life sentence without parole for charges associated with a nonviolent drug case. During that 22 years, she became a prison minister and worked to help others also choose a better path for themselves.

“When I saw Alice’s beautiful family greet her at the prison gates, hugging and kissing and crying and laughing, I knew I did something right,” Trump said.

The hot-button issue of the night was always going to be border security. Trump reiterated the need for Congress to appropriate funds for a border wall before Feb. 15.

“Now is the time for the Congress to show the world that America is committed to ending illegal immigration and putting the ruthless coyotes, cartels, drug dealers, and human traffickers out of business,” he said.

“We have a moral duty to create an immigration system that protects the lives and jobs of our citizens. Not one more American life should be lost because our nation failed to control its very dangerous border.”

Three of Trump’s 13 guests at the SOTU were family members of an elderly couple who were fatally shot in their Reno, Nevada, home by an illegal alien in January.

“No issue better illustrates the divide between America’s working class and America’s political class than illegal immigration,” Trump said. “Wealthy politicians and donors push for open borders while living their lives behind walls and gates and guards.”

“And to give critically ill patients access to life-saving cures, we passed right to try,” he said.

“The next major priority for me, and for all of us, should be to lower the cost of healthcare and prescription drugs—and to protect patients with pre-existing conditions.”

Capitalizing on the bipartisan issue of bolstering America’s infrastructure, Trump said he is eager to work together with Congress on legislation toward, “a great rebuilding of America’s crumbling infrastructure …  including investments in the cutting edge industries of the future.”

Trump has been outspoken against socialism and used his platform to clearly denounce it again.

“Here in the United States we are alarmed by the new calls to adopt socialism in our country,” he said. “America was founded on liberty and independence and not government coercion, domination, and control. We are born free and we will stay free.

“Tonight we renew our resolve that America will never be a socialist country.”

Trump announced that he will meet with North Korean dictator Kim Jong Un on Feb. 27 and 28 in Vietnam.

The two first met in June 2018, when Kim committed in writing to the denuclearization of his country.

Trump has spent the last two years rebuilding the military and on Dec. 19, 2018, he announced the withdrawal of U.S. forces from Syria.

“Today, we have liberated virtually all of that territory from the grip of these bloodthirsty killers,” he said. “One of the most complex set of challenges we face is in the Middle East.”

Trump finished his speech with a rousing cry for unity.

“We must choose whether we are defined by our differences—or whether we dare to transcend them,” he said. “This is the time to rekindle the bonds of love and loyalty and memory that link us together as citizens, as neighbors, as patriots. This is our future—our fate—and our choice to make. I am asking you to choose greatness.”