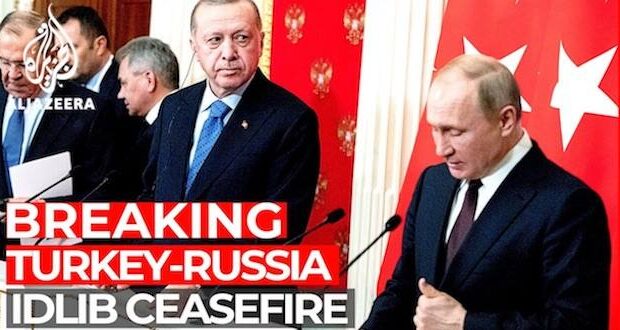 A cease-fire began Thursday night in northern Syria between the armies of Turkey and Russia as fighting had threatened to put their forces into all-out war.

President Trump, in an effort to keep U.S. forces from being caught in the middle of the growing conflict between Russia and Turkey, had pulled 100 U.S. forces from the northern regions of Syria in October.

At the time, Trump was criticized by Democrats and many Republicans for the withdrawal. Trump responded to the criticism saying Americans were not interested in fighting a war with NATO member Turkey or Russia.  Trump also said he did not want American troops caught between the two regional superpowers–with Russia having the world’s third-largest army. Foreign policy experts, who also joined in media criticism of the withdrawal at the time, are now saying Trump made the right move.

The deal struck by Russian President Vladimir Putin and Turkish President Recep Tayyip Erdogan sets a security corridor along a key east-west highway in Idlib province. With the withdrawal of U.S. troops, the two countries were forced to work out a deal themselves without the ability to use American troops as bargaining chips.

Putin voiced hope the agreement will serve as a “good basis for ending the fighting in the Idlib de-escalation zone, put an end to suffering of civilian population and contain a growing humanitarian crisis.”

The agreement appears to achieve Russia’s key goal of allowing the Syrian government to secure control over strategic highways essential for consolidating its reassertion of authority on the country after a devastating nine-year war.

But in a nod to Turkey’s interests, the deal also puts the brakes on Syrian President Bashar Assad’s push to reclaim control over all of Idlib province, the last opposition-controlled region that borders Turkey.

Erdogan said he and Putin agreed to help refugees return to their homes. More than 900,000 people have been displaced by the fighting since Assad’s forces began an offensive in December backed by Russian airstrikes.

The Trump administration has been pushing for a way for Syrian refugees to safely return home.

Both leaders had underlined the need for an agreement at the start of the Kremlin talks, which lasted more than six hours. One goal had been to prevent damaging their bilateral relations and blossoming trade.

U.N. Secretary-General Antonio Guterres “takes note” of the cease-fire agreement and hopes it will lead “to an immediate and lasting cessation of hostilities that ensures the protection of civilians in northwest Syria, who have already endured enormous suffering,” U.N. spokesman Stephane Dujarric said.

Guterres also called for a return to the U.N.-facilitated political process, aimed at ending the nine-year conflict, Dujarric said.

Until the latest crisis, Putin and Erdogan had managed to coordinate their interests in Syria even though Moscow backed Assad while Ankara supported the government’s foes. Both Russia and Turkey wanted to avoid a showdown but the sharply conflicting interests in Idlib province made it difficult to negotiate a mutually acceptable compromise.

The Syrian offensive in Idlib has resulted in Turkey sending in thousands of troops to repel the Syrian army. Clashes on the ground and in the air have left dozens dead on both sides. Russia, which has helped Assad reclaim most of the country’s territory, has signaled it won’t sit by while Turkey routs his troops.

The fighting also has pushed nearly 1 million Syrian civilians toward Turkey, which already hosts more than 3.5 million Syrian refugees. Erdogan responded by opening Turkey’s gateway to Europe in an apparent bid to persuade the West to offer more support to Ankara.

Konstantin Kosachev, head of the Russian upper house’s foreign affairs committee, hailed the deal as a compromise that respected security interests of each country.

“The only alternative to the talks would be trying to sort out the differences on the battlefield, and neither side needs that,” he said on Facebook.