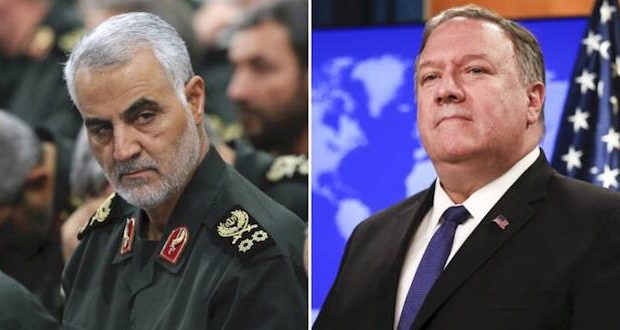 On Saturday thousands protested across the United States against the killing of Iranian Revolutionary Guard leader General Qassim Soleimani. Democrat Presidential Primary candidates denounced President Trump and the killing while Hollywood actors tweeted their support for Iran and stated Americans live in a “terrorist” state.

But in Iraq, tens of thousands were dancing in the streets in support of President Donald Trump and the attack.

The events since the U.S. killed Soleimani show a sharp contrast between Iraqis, fed up with Iran’s growing control of their country, and U.S. liberals who are supporting the world’s greatest sponsor of terrorism.

Soleimani, Iran’s top general and the architect of Tehran’s proxy wars in the Middle East, was killed by a U.S. airstrike at Baghdad’s international airport early Friday morning.

The sight of Iraqis celebrating America has been ignored by American media which focused on Democrat opposition. That has led U.S. Secretary of State Mike Pompeo to share footage showing Iraqis celebrating the death of Iran’s top military general, Soleimani (also known as Qassem Soleimani).

Soleimani was responsible for orchestrating attacks on coalition bases in Iraq over the past several months, which included the attack at the Kirkuk military base in northern Iraq on Dec. 27 that killed an American and wounded several American and Iraqi troops.

Soleimani also approved the attacks on the U.S. Embassy in Baghdad that took place earlier this week, the department said in their statement. The two-day Iran-backed embassy attack, which began on New Year’s Eve and ended Wednesday, prompted Trump to deploy about 750 U.S. soldiers to the embassy.

Pompeo’s post shows footage of people running through the streets, cheering as they carry the national flag of Iraq after Soleimani’s death. The tweet, which is flooded by ensuing comments that appear to also celebrate the death of Soleimani, reads: “Iraqis—Iraqis—dancing in the street for freedom; thankful that General Soleimani is no more.”

Iraqis — Iraqis — dancing in the street for freedom; thankful that General Soleimani is no more. pic.twitter.com/huFcae3ap4

Iraqis — Iraqis — dancing in the street for freedom; thankful that General Soleimani is no more. pic.twitter.com/huFcae3ap4

That didn’t stop Hollywood actors and many Democrats from praising Iran.
Rose McGowan defended then ultimately backpedaled a tweet apologizing to Iran after airstrike

Dear #Iran, The USA has disrespected your country, your flag, your people. 52% of us humbly apologize. We want peace with your nation. We are being held hostage by a terrorist regime. We do not know how to escape. Please do not kill us. #Soleimani pic.twitter.com/YE54CqGCdr

After tremendous backlash on Twitter, the actress apologized for the tweet then apologized the the apology. She is a virulent opponent of Present Trump and has regularly made anti-American tweets in the past.

The United States in April 2019 designated Iran’s IRGC as a foreign terrorist organization (FTO). It marked the first time that the United States designated part of a foreign government as a terror group. The State Department announced at the time that the FTO designation “highlights that Iran is an outlaw regime that uses terrorism as a key tool of statecraft and that the IRGC, part of Iran’s official military, has engaged in terrorist activity or terrorism since its inception 40 years ago.”

Officials who confirmed Soleimani’s death said the strike also killed Abu Mahdi al-Muhandis, the deputy commander of Iraq’s Iran-backed Shiite militias known as the Popular Mobilization Forces (PMF). The PMF, formed in 2014 with about 140,000 members in total, is an Iraqi government-sanctioned state umbrella group spanning about a dozen militia groups—most of the groups, however, are mostly backed by Iran.

Widespread protests in Iraq have been happening since October and have seen thousands of local Iraqis taking to the streets in Baghdad. The protesters accused the government of being corrupt and decried the Iranian regime’s growing influence in Iraqi state affairs through the militia groups. The mass uprisings have left more than 450 people dead, the vast majority being protesters—killed by security forces using tear gas and live ammunition.

The Wall Street Journal reported that militia groups hold about 47 parliamentary seats, giving them significant influence in the Iraqi government. According to the WSJ, Iran’s increasing influence over the militia groups and in Iraqi parliament “has stirred public discontent and contributed to nationwide protests” since October.

A senior Iraqi security official told The Associated Press that the airstrike that killed Soleimani took place near a cargo area near Baghdad International Airport after he left his plane and joined al-Muhandis and others in a car. The official added that the plane had arrived from either Lebanon or Syria.

Several hours after their deaths, the Department of Defense confirmed that President Donald Trump directed the U.S. military to kill Soleimani.

“At the direction of the President, the U.S. military has taken decisive defensive action to protect U.S. personnel abroad by killing Qasem Soleimani, the head of the Iranian Revolutionary Guard Corps-Quds Force, a U.S.-designated Foreign Terrorist Organization,” the department said in a statement late Thursday.

Pompeo pointed out in an earlier tweet that al-Muhandis was spotted outside the U.S. Embassy in Baghdad amid the attacks. Al-Muhandis’s role in the attacks was unclear.

The attack today was orchestrated by terrorists – Abu Mahdi al Muhandis and Qays al-Khazali – and abetted by Iranian proxies – Hadi al Amari and Faleh al-Fayyad. All are pictured below outside our embassy. pic.twitter.com/2QfGGrfmDd

Al-Muhandis was also a former leader of the Iranian-backed Kataib Hizbollah (Kata’ib Hezbollah, KH) terror organization that’s part of the PMF. He has a long history of terrorist and subversive activities. In 1983, he led terrorist attacks against the U.S. and French embassies in Kuwait, and his men have since been accused of extrajudicial killings in western Iraq.

U.S. officials have suggested they were prepared to engage in further retaliatory attacks in Iraq.

“Let me speak directly to Iran and to our partners and allies,” Defense Secretary Mark Esper said on Thursday. “To Iran and its proxy militias: we will not accept continued attacks against our personnel and forces in the region. Attacks against us will be met with responses in the time, manner, and place of our choosing. We urge the Iranian regime to end their malign activities.

“To our partners and allies: we must stand together against the malign and destabilizing actions of Iran. The 81 nations and member organizations of the Defeat ISIS Coalition are in Iraq and Syria, and cooperating around the globe to defeat ISIS … Unlike the Iranians who continue to meddle in Iraq’s internal affairs and seek to use corruption to further Tehran’s malign influence, the United States and our allies are committed to an independent, stable, secure, and sovereign democratic Iraq that addresses the aspirations and needs of the Iraqi people, who we see protesting for these very things and objecting to Iran’s malign influence.

“We call on our friends and allies to continue to work together to reduce Iran’s destabilizing influence so Iraq is governed by Iraqis without this interference in its internal affairs,” Esper said.