Home / News / National / All topics on table at Democrat debate, including gun confiscation 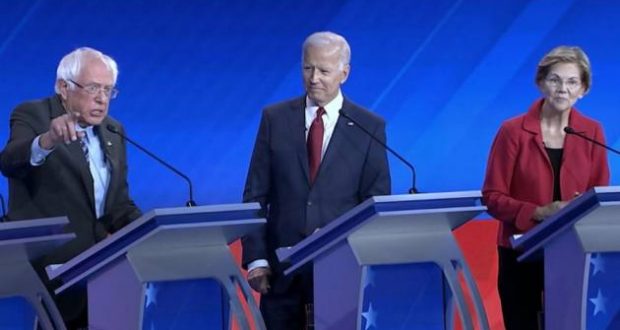 All topics on table at Democrat debate, including gun confiscation

The top ten Democrats running to challenge President Trump for the White House jockeyed to distinguish themselves in a third debate often speaking over each other and going way beyond their time.

During a passionate moment on gun violence, Robert “Beto” O’Rourke admitted what the nation’s millions of gun owners fear – that he plans to confiscate weapons from law-abiding citizens.

“Yes. We’re gonna take your AR-15’s, your AK-47’s. We’re not gonna allow it to be used against our fellow Americans anymore,” said O’Rourke to applause from the Democrat audience.

O’Rourke, who is not Hispanic yet requires reporters to refer to him by his college nickname,  stated that AR-15s are used by the U.S. Military. There’s just one problem. They’re  not.

But it wasn’t O’Rourke and his lack of understanding of the military who the audience was interested in, it was the big three.

Competing with Senators Bernie Sanders (D-VT) and Elizabeth Warren (D-MASS), front runner Joe Biden case himself as a practical liberal painting Medicare for all as out of touch with reality and the nation’s budget.

“This is about candor, honesty, big ideas. Well, let’s have a big idea. The tax of 2% the senator is talking about – that raises about $3 billion dollars. Guess what. that leaves you about $28 billion dollars short. The senator said before it’s going to cost you. There will be a deductible in your paycheck,” argued former Vice President Joe Biden.

“Let us be clear Joe. In the United States of America, we are spending twice as much per capita on healthcare as the Canadians or any other major country on earth,” said Sanders waving his hands in his signature way.

“This is America,” quipped Biden.

“Yeah but Americans don’t want to pay twice as much as other countries,” responded Sanders.

And while Biden tossed a few arrows he took twice as many. The sharpest came from former Obama Housing Secretary Julian Castro.

“He wants to take credit for Obama’s work, but not have to answer to any questions,” said Castro.

“I stand with Barack Obama all eight years good, bad and indifferent,” Biden responded and for the first time admitting that not all was roses during the administration in which he served.

Castro struck another blow still reverberating among Democrats when he played into speculation about Biden’s mental acuity. It came as Castro worked to differentiate his health care plan from Biden’s.

Sen. Kamala Harris (D-CA) made a name for herself by going after Biden in the first debate, but this time she kept her focus on the president.

“Donald Trump in office on trade policy, you know, he reminds me of that guy in the Wizard of Oz. You know, when you pull back the curtain it’s a really small dude,” she said with a smile as the audience laughed.

The big question candidates are asking today: will any of their performances at the debate move the needle in the polls? President Trump is still the favorite to win in 2020.