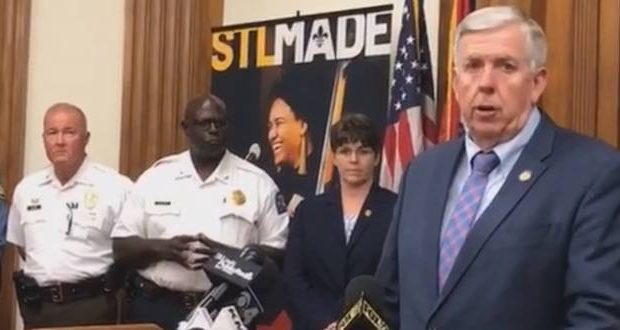 This week, Missouri legislators and the governor have been meeting with St. Louis officials to address the city’s gun violence.

On Thursday, the latest victim of the spiraling crime rate in St. Louis was a 13-year-old who was walking through an apartment complex. According to the St. Louis Post Dispatch, six children have died from gunshot wounds in St. Louis County this year, and 13 children have been killed by gunfire in the city of St. Louis this year.

Gov. Parson has promised to announce the first steps of a state-local plan within the week. He says he will also meet with county and city prosecutors soon.

“I’m not the fix-all to everything, I’m not. But I want to support everybody at the table today. I want to come up with solutions.”

Parson is correct that there’s little the state can do  to alleviate the crime problem in the state’s two largest cities – St. Louis and Kansas City.

“As somebody who has been in law enforcement for 22 years and I am standing up here with these fellow officers who are up here today to try to figure out how do we deal with this terrible situation in our state. And the bottom line is how do we protect those children who are out there being killed in the streets every day.”

Meanwhile, Democrat lawmakers who were in the state capital for a special session this week asked for an interim committee to address gun violence across the state. Kansas City Senator Kiki Curls asked her chamber, “Maybe there is some gray area, some middle ground so that we can make sure that folks that are using firearms and guns lawfully are not impacted by it.”

So far, few elected officials have wanted to mention the elephant in the room – black on black gun violence that takes the majority of lives in the state.

Senate President Dave Schatz, a Republican from Sullivan, near St. Louis, says he will consider the idea as long as it “does not take guns away from law-abiding citizens.”

The vast majority of urban gun deaths are from individuals illegally possessing firearms.

Previous: All topics on table at Democrat debate, including gun confiscation
Next: Doctor acquitted in euthanasia lawsuit over patient who had to be restrained