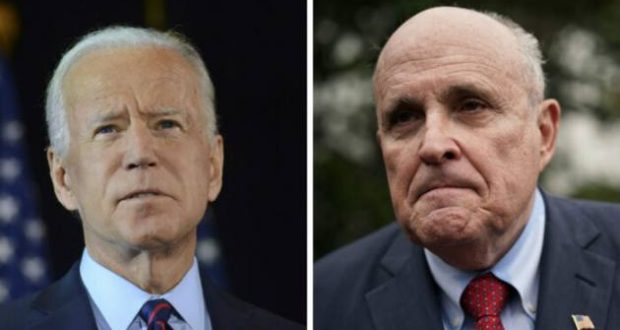 Biden’s 2020 campaign sent the letter Sept. 29 to networks alleging Giuliani is spreading “false, debunked conspiracy theories on behalf of Donald Trump.”  Giuliani has been an effective counter to what many see as a media narrative that ignores wrong doing by the Biden family while supporting  unfounded impeachment efforts by Democrats.

“While you often fact check his statements in real time during your discussions, that is no longer enough,” spokeswomen Kate Bedingfield and Anita Dunn wrote. “By giving him your air time, you are allowing him to introduce increasingly unhinged, unfounded, and desperate lies into the national conversation.”

Biden’s campaign said they were writing “to demand” that networks “no longer book Rudy Guliani.”

If networks ignore the letter and keep booking Guliani, the campaign said, then “you need to give an equivalent amount of time to a surrogate for the Biden campaign.”

Dunn and Bedingfield concluded the letter by telling networks that giving Guliani air time “is a disservice to your audience and a disservice to journalism,” adding, “We ask that you no longer book him on your air.”

Guliani hit back, posting a portion of the letter on Twitter and writing: “The Bidens are clearly rattled by the affidavit showing there is a named accuser and not an anonymous source, who is ready to testify! Reminds me of the reaction to the corrupt pols of the 70s and 80s. They have their Dem media trying to destroy my reputation and silence me!”

The affidavit Guliani cited was provided by Viktor Shokin, who resigned in 2016 under pressure from the Ukrainian President at the time, Petro Poroshenko.

Shokin said, “The truth is that I was forced out because I was leading a wide-ranging corruption probe into Burisma Holdings, a natural gas firm active in Ukraine, and Joe Biden’s son, Hunter Biden, was a member of the Board of Directors.”

At the time of the ousting, Shokin was probing Burisma, which was paying Biden’s son Hunter Biden tens of thousands of dollars a month.

“In my conversations with Poroshenko at the time, he was emphatic that I should cease my investigations regarding Burisma. When I did not, he said that the U.S. (via Biden) were refusing to release the $1 billion promised to Ukraine. He said that he had no choice,” Shokin wrote in the affidavit.

Shokin said that he agreed to resign because he wanted to do what was best for Ukraine but changed his mind after the fact after Biden bragged about getting him removed in 2018.

Previous: Facebook refused to shut down page of Fatah even after it encouraged terrorism
Next: Is Pope set to give green light to married priests?