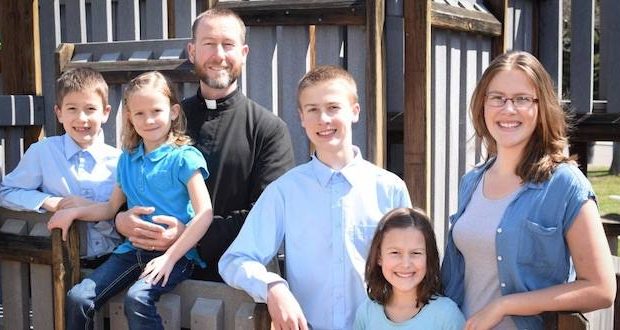 Father Bart Stevens serves the Great Falls-Billings (Montana) Diocese with his Becky, and their children, Sydney, 15, Charles, 13, Virginia, 11, Soren, 8, and Zelie, 6, at his side.

Is Pope set to give green light to married priests?

Pope Francis will commence a three-week synod of Amazonian bishops at the Vatican on October 6 which will consider breaking the centuries-old tradition of only having single priests.

It is among 146 items to be considered but it is the controversial focal point, with some cardinals saying they will call for the Pope’s resignation if it goes through with it.

The proposal calls for older married men with grown children and a strong standing in the Church – ‘viri probati’ or proven men – to join the priesthood and help fill a gap in sparsely populated communities.

A tribal elder with ten adult children, Yampik Wananch, 48, is a leading figure in one of the Catholic Church’s most remote outposts in the Peruvian village of Wijint.

Yampik, who like other indigenous Achuar peoples was converted by missionaries decades ago, said: ‘I feel it in my heart. I want to be a priest.’

A three-day boat ride from the nearest town with paved roads, Wijint is one of 827 native communities in the Vicariate of Yurimaguas, a region nearly the size of Panama ministered by just 25 priests.

At least 85% of villages in the region cannot celebrate Mass every week, a ritual in which Catholics believe communion bread and wine are transformed into the body and blood of Jesus.

Yampik is one of four married ‘viri probati’ Achuar deacons who will be discussed for the priesthood at the synod.

Proponents say the Amazon region is in desperate need of a change at a time when Pope Francis is already under ferocious criticism from the conservative wing. 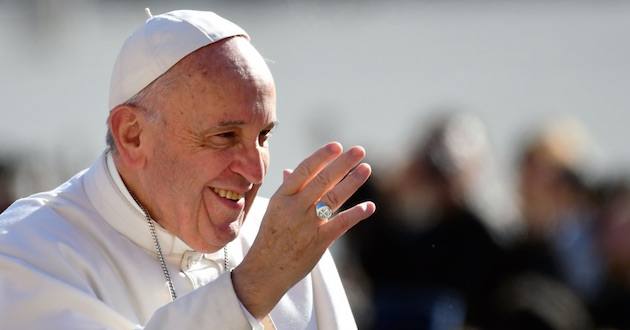 The document says: ‘While affirming that celibacy is a gift for the Church, there have been requests that, for the most remote areas of the region, (the Church) studies the possibility of conferring priestly ordination on elderly men, preferably indigenous, respected and accepted members of their communities.’

It has been branded heretical by those who believe it takes the Church down a slippery slope towards the abolition of priestly celibacy, which became obligatory in the 12th century in part to keep children of priests from inheriting Church property.

German Cardinal Gerhard Muller says the document ‘lacks theological reflection’ and puts its faith in ‘human ideas to save the world’ rather than Jesus.

He believes the change could cause a schism so grave that people would leave the Church.

On a recent trip the Pope affirmed he ‘would rather give his life’ than change the celibacy rule, even as he listens to the idea of married priests.

The Church teaches that by remaining celibate and unmarried, a priest can devote himself entirely to God and the Church.

The policy of banning married priests is neither consistent or historical to the church’s founding. Priests could and were married for the roughly first 1,000 years of church history and the celibacy clause was not reinforced until the 1500s.

The Roman Catholic Church’s position today is derived from the Council of Trent. Celibacy is considered an important part of the priesthood, a sign of a priest’s commitment to God and service. Today, though, there are some exceptions to the rule of unmarried clergy. Anglican ministers who were already married when they joined the Catholic Church are allowed to remain married if they choose to join the priesthood.

Many say the church cannot have it both ways and must change or risk not having enough priests to serve hundreds of thousands of congregations around the world.

But American Cardinals are some of the strongest holdouts against allowing married priests.  Cardinal Raymond Burke is among those who claim they will ask for Francis’ resignation if he goes ahead with the proposal.

The requirement has crimped efforts to recruit priests to minister to all its current members – much less expand – in traditional strongholds like Latin America, where evangelical Christians are the fasting growing group of new believers.

The Vatican has allowed some leeway before. Some Anglican priests who were already married when they converted to Roman Catholicism were able to continue to serve as priests.

But it has not made an exception to its celibacy rule for the purpose of addressing shortages of priests. It is a discipline, though, not a dogma, and therefore can be changed.

The synod does not make decisions. Only the pope can. Participants will vote on various articles in a final document, which will then go to the pope to decide whether to make it into an official Apostolic Exhortation. 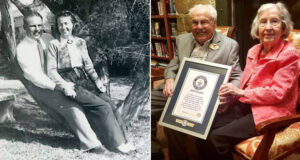 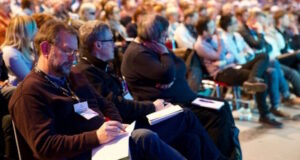 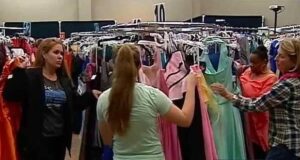 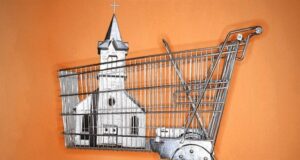