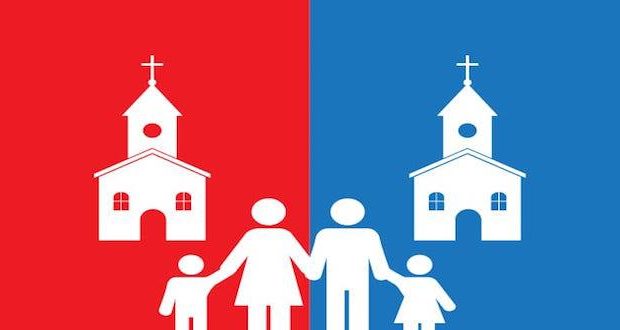 Church affiliation proves to be reliable indicator of party affiliation

One of the best ways to predict if someone is a Republican or a Democrat is to ask if they regularly attend church – and what church.

Almost every predominantly white Protestant denomination — from Southern Baptists and United Meth­odists to Missouri Synod Lutherans and the Assemblies of God — is solidly Repub­lican, according to data from the 2018 Co­operative Congressional Election Study reported in The Christian Century.

READ: Faith leaders say Evangelicals will again show up to vote in 2020

By contrast, some of the largest predominantly white Protestant denominations, including the 14.8-million-member Southern Baptist Convention, the United Methodist Church and the Evan­gelical Lutheran Church in America, all lean Republican. So do nondenominational evangelical churches.

Of the top 20 denominations, only two became less Republican in a statistically significant way in the last ten years, according to the data from the 2008 and 2018 reports. On the other hand, 16 of these denominations have larger shares of Republicans today than they did when Barack Obama was elected in 2008. This includes the United Church of Christ, which was one of the first denominations to affirm LGBT people; it became 4 percent more Republican in the last decade. Buttigieg’s tradition, the Episcopal Church, also saw 4.7 percent more of its members identify as Republicans.

The two largest denominations, the Southern Baptist Convention and the United Methodist Church, which together comprise nearly a quarter of all white Protestants, are 5 percent more Repub­lican today than 10 years ago.