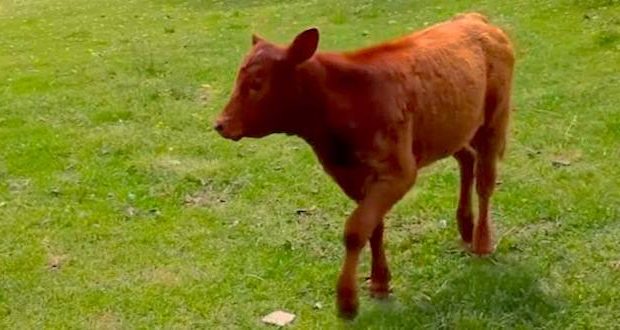 Does birth of red calf signal the end times?

A Jewish organization whose goal is the building the Third Temple has made a startling announcement. The Temple Institute revealed this week the birth of a flawless all-red heifer that they say could pave the way for the fulfillment of a major End Times biblical prophecy.

According to news outlets, the reddish-colored female calf was born in Israel on August 28 and is being raised in accordance with the Jewish laws of the Torah, according to the Temple Institute.

In Jewish theology, the red heifer is essential to the rebuilding of the third Holy Temple in Jerusalem. It will be needed to be sacrificed to complete the ritual of purification for the Temple. The Second Temple was destroyed by the Romans in 70 A.D. It was the Temple in which Jesus would have worshiped and its destruction marked the diaspora of both Jews and Christians from the Holy Land of Israel. Not until 1967 would Jews once again control the Temple Mount which now is the site of a Muslim Mosque and Dome of the Rock.

Jews believe this event is part of the process that would mark the coming of the Messiah and the final judgment.

But the significance of the red heifer also relates to Christians who believe the completion of the third Temple is a symbol heralding the second coming of Jesus Christ.

It is claimed there have only been nine true red heifers, and the 10th will herald the construction of the third Temple.

Several red heifers have been born in the past, but have been disqualified for not meeting the Biblical requirements.

Israel News reports this year’s newborn red heifer was certified by a board of rabbis one week after its birth.

“If there has been no red heifer for the past 2,000 years, perhaps it is because the time was not right; Israel was far from being ready,” Rabbi Chaim Richman, the international director of the Temple Institute, wrote on their website.

The Temple Institutue is an organization planning for the eventual rebuilding of the Temple. It has already completed the meticulous reconstruction of many of the sacred vessels that will be used in Temple ceremonies.

Those items that are completed include the three most important and central vessels of the Divine service: the seven-branched candelabra, or Menorah, made of pure gold; the golden Incense Altar, and the golden Table of the Showbread.

In addition the Institute’s website says they have “completed the sacred uniform of the Kohen Gadol, the High Priest. This project was the culmination of years of study and research.” The site says the High Priest’s Choshen (Breastplate) and Ephod have also been completed.

They are even on display in Jerusalem or in the video below.

But why is the birth of this calf important now and why do some believe the rebuilding of the Temple is imminent?

For one thing, the modern state of Israel wasn’t reestablished until 1948. This year marked the 70th anniversary of that historic event.

Rabbi Richman continued, “But now what could it mean for the times we live in, to have the means for purification so close at hand? With the words of Maimonides in mind, we cannot help but wonder and pray: If there are now red heifers, is ours the era that will need them?”

To meet requirements, the heifer must be born from a natural birth and be entirely red with no more than two non-red hairs on its body. It must also never have been used for any labor or have been impregnated.

The Bible refers to the red heifer in Numbers 19 which begins, “And the Lord spoke to Moses and Aaron, saying: This is the ordinance of the Torah which the Lord has decreed, saying, Speak to the children of Israel and have them bring you a red heifer without defect, in which there is no blemish, and upon which never came a yoke…”

The rabbis emphasized that the heifer could, at any time, acquire a blemish rendering it unsuitable. They will be inspecting the calf periodically to verify its condition.

Jewish tradition requires the heifer to be three-to-four years old when it is used for the purification and rebuilding the Temple.

Previous: Another effort to keep Kobach off ballot fails
Next: Facebook CEO models himself after brutal Roman emperor