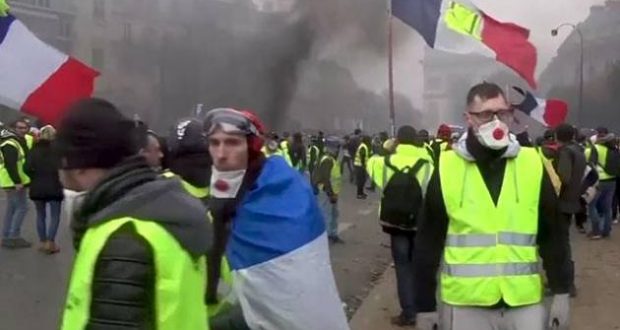 Just  a week ago President Emmanuel Macron of France was scolding America for its unwillingness to raise taxes to reduce carbon emissions. Now the flamboyant leader, who was regularly compared to John F. Kennedy, is in virtual hiding as some headlines include the world “coup” in relation to his future.

Macron is not alone as the United Nations is pushing a picture of gloom and doom over climate change. But the people of France are pushing back and it could be the start of a global trend. The backlash against European leaders is spreading as voters say, “enough” to government attempts to cool the Earth by taxing workers with tens of trillions of dollars in additional tax burden.

At the climate summit in Poland, the UN secretary general urged world leaders to take the threat of climate change seriously. He said bold action is needed if nations are to prevent a catastrophic rise in temperatures before the end of the century.

“If we fail, the Arctic and the Antarctic will continue to melt, corals will bleach and then die, the oceans will rise, more people will die from air pollution, water scarcity will plague a significant proportion of humanity, and the cost of disasters will skyrocket,” warned Antonio Guterres.

But tell that to anti-government protestors in Paris. Their actions signal a growing backlash against climate change policies.

The protestors crippled the “City of Light,” rioting, looting and even defacing parts of the famous Arc de Triomphe.

It was all over a steep tax increase on gasoline. The French government believes it can combat climate change by raising fuel taxes and that may lead to reduced carbon emissions. But instead, just the threat of an increase led to national fury and mayhem.

French President Emmanuel Macron has backed off from implementing the fuel tax increase, at least for now.

President Trump isn’t buying it either, tweeting this week: “I am glad that my friend @emmanuelmacron and the protestors in Paris have agreed with the conclusion I reached two years ago. The Paris agreement is fatally flawed because it raises the price of energy for responsible countries while whitewashing some of the worst polluters….”

Last year, the president announced he’s pulling the US out of the Paris Climate Agreement because it would cripple the US economy. “Thus as of today the US will cease all implementation of the non-binding Paris Accords,” he said.

Trump said he won’t allow American workers and taxpayers to absorb the cost of those accords in terms of lost jobs, lower wages and closed factories.

Stephen Moore, economist and senior fellow at the Heritage Foundation, says a “doom and gloom” lobby is pushing the climate change agenda in America and around the world.

“I estimate that the climate change industrial complex–and that’s what we have today–is tens and tens of billions of dollars to spread this doom and gloom. We have created whole industries of climate scientists to come up with these models that predict the world is coming to an end.”