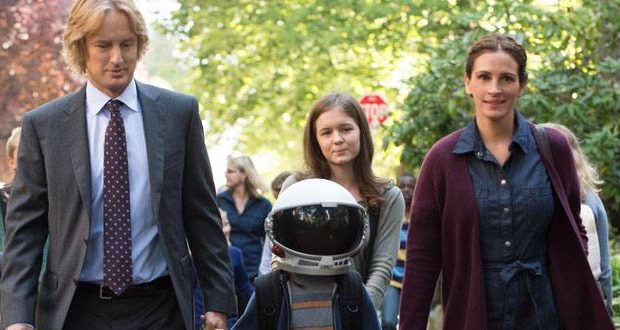 In the movie Wonder, Auggie Pullman is an energetic and smart 10-year-old who is like most boys his age. He enjoys video games, Star Wars and all-things-NASA.

Except that he’s not like any other boy his age. He looks different. He sounds different. When he enters a room, people stare.

Auggie was born with facial differences, and even though he’s undergone multiple surgeries to improve his hearing and his looks, he still stands out in a crowd. That’s one reason he wears a toy-like space helmet. Sure, it conveys his passion for science, but it also hides his face.

But now Auggie is exiting the comfortable confines of homeschooling and entering fifth grade in a public setting – a setting that could lead to stares, scorn and ridicule.

Will his classmates accept him?

The 2016 inspirational hit Wonder (PG) will release on DVD Feb. 13 and digital platforms Jan. 30, giving families the opportunity to watch and discuss one of the best films ever made on the subject of bullying. It stars Jacob Tremblay as Auggie, Owen Wilson as his father, Julia Roberts as his mom, and Izabela Vidovic as his teenage sister, Via.

Wonder is not a faith-based movie, but its message is clear: Every person is valuable. The film’s focus nearly gets derailed with a pair of fights that seemingly endorse violence, but that can be fixed with a post-movie family talk.

Wonder is rated PG for thematic elements including bullying, and some mild language. It is based on a children’s book by the same name.

Also on DVD this month:

Only The Brave (PG-13 – DVD Feb. 6, digital Jan. 23) – Based on a true story of a “hotshot” firefighting crew that lost 19 members during an out-of-control 2013 Arizona wildfire. Only The Brave has a solid pro-family message and a redemptive element, but tons of coarse language (I counted 70 words). Rated PG-13 for thematic content, some sexual references, language and drug material.

Same Kind of Different As Me (PG-13 – DVD Feb. 20, digital Feb. 6) – An art dealer gets a new perspective on life and family when he befriends a homeless man. Based on a New York Times bestseller of the same name, this one spotlights forgiveness in a way that may surprise you. It also puts Romans 8:28 and its implications on display. Recommended for teens and adults. Rated PG-13 for thematic elements including some violence and language (one misuse of h—l and four instances of the n-word).

The Star (PG – DVD Feb. 20, digital Feb. 6) – A first-century donkey, dove and sheep accompany Mary and Joseph on their journey to Bethlehem. Recommended for the entire family. Rated PG for some thematic elements.

Steve McQueen, American Icon (Unrated – DVD Feb. 20, digital Feb. 6) – He starred in more than 30 films and 20 TV series during the 1950s, ‘60s and ‘70s and was the highest-paid actor in Hollywood. But toward the end of his life – sensing a void – he found Christ, as we learn in this documentary. Recommended for older children, teens and the entire family. No language or sexuality. Minimal violence.

Coco (PG — DVD Feb. 27, digital Feb. 13) – The latest Pixar film is colorful, funny … and full of theological problems. It’s based on Día de los Muertos (“Day of the Dead”), a Mexican holiday in which families build shrines within their home to deceased ancestors so as to commune with and remember their relatives. Yes, those dead relatives come to life in Coco. Rated PG for thematic elements.

Film reviewer Michael Foust is the husband of an amazing wife and the father of four small children.