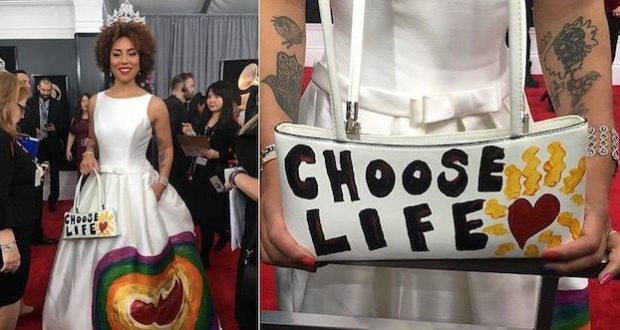 Singer Joy Villa likes to shake it up. The pro-life singer is unashamed of her conservative values in a liberal entertainment industry.

Joy Villa is not shy about her strong beliefs–even when those beliefs are at odds with Hollywood and the music industry. The singer showed up at the 60th Grammy Awards tonight in a dress meant to make a statement. According to published reports she wore a white wedding dress that she hand-painted with the image of an unborn baby surrounded by a rainbow paired with a purse that read “choose life.”

“I’m a pro-life woman. This year I chose to make a statement on the red carpet like I always do,” she told Fox News. “I’m all about life.”

Villa, who made a name for herself at last year’s Grammys with a “Make America Great Again” dress, paired her Pronovias dress with a tiara and sparkling jewlery. She said she was inspired to paint this year’s dress because she gave a baby up for adoption when she was 21, and she said she supports adoption over abortion.

The 26-year-old said she is thrilled with President Trump so far.

“I love what he is doing; unemployment is down,” she said. “I am totally for President Trump, and it’s only been one year. I can’t wait for the next seven years!”

She said she spoke to the president’s daughter Ivanka Trump over the holidays.

“I’m very close with his daughter Ivanka. She is a phenomenal woman. She wants to empower women.”

Villa said there are very few conservative celebs, but that doesn’t deter her from sharing her point of view.

“There is a lot of hypocrisy we see from celebrities,” she insisted.

Villa praised Trump’s tax plan and said she is excited about what’s coming from the administration in 2018.

“I’m looking forward to saving money on my taxes as a small-business woman,” she said.

“I am looking forward to seeing Americans… [feeling patriotic] again. I’m glad that conservative values are back at the forefront as a pro-life woman.”