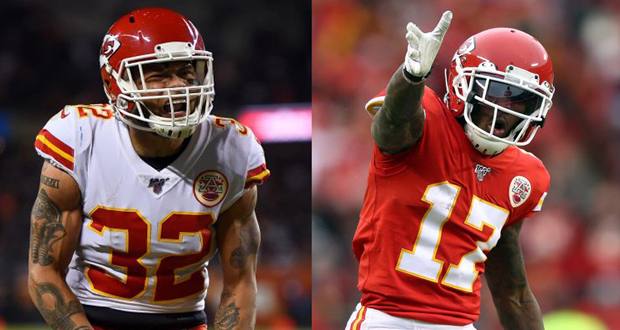 Two of the Chiefs’ standout players from this season are getting some love from their coaches and teammates. Two days after winning the Super Bowl, the Kansas City Chiefs announced their MVP for the 2019 season.

Patrick Mahomes is the latest Super Bowl MVP, but he’s not the Chiefs’ 2019 team MVP.

That honor has gone to All-Pro safety Tyrann Mathieu, also known as the Honey Badger. The Chiefs announced the MVP result on Tuesday, along with naming wide receiver Mecole Hardman as the recipient of the Mack Lee Hill Award for Rookie of the Year.

Mathieu joined the Chiefs as a free agent last March, and his impact as both a player and leader was immediate. His teammates noticed. The seventh-year pro had a fantastic debut season with the Chiefs, earning All-Pro honors for the second time while tallying 75 tackles, four interceptions and two sacks.

Mathieu has experienced his share of troubles during his career, but he has matured and become a real leader, and an inspiration to the Chiefs defense.

“I’m so happy that God chose me to kinda inspire the next person,” he said after the Super Bowl win. “I’m so grateful for God and all the people that God put in my life.”

Hardman, nicknamed the Jet, made a name for himself in the NFL this season for his speed. He recorded six touchdowns, 538 receiving yards and a kickoff return for a touchdown in his first season. He was named to the Pro Bowl as a return specialist but didn’t play in the game since the Chiefs went to the Super Bowl.

Mahomes won the team MVP award, named for Derrick Thomas, in 2018. The awards are determined by a vote of players and coaches. According to the team, the ballots are cast at the same time the players and coaches vote on the Pro Bowl.

Previous: President touts historic economy in address
Next: The stock market in election years: should you be worried?