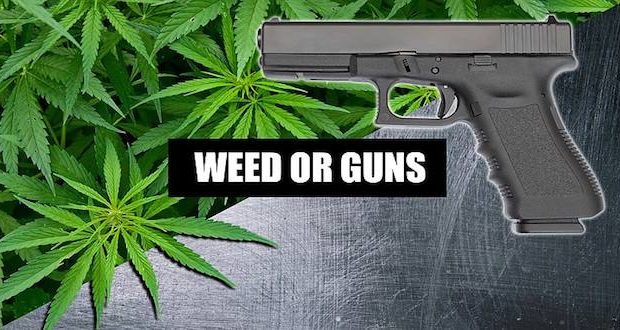 Missourians can’t have medical pot and a gun

It wasn’t advertised in the push to legalize medical marijuana in Missouri but a review of federal law means Missourians who want to get their medical marijuana card would need to choose between using the drug or keeping their gun.

Keeping both means running the risk of being arrested because it’s illegal under federal gun laws for any marijuana user to possess a firearm.

John Ham with the Bureau of Alcohol, Tobacco, Firearms, and Explosives said both recreational and medical marijuana is still considered a schedule 1 controlled substance at the federal level.

Now that more than half of all states in the nation have legalized medical cannabis, Cardetti thinks momentum is building to change federal marijuana laws.

“I think there is a good chance that marijuana will no longer be a schedule 1 narcotic,” Cardetti said. “It will either be rescheduled or de-scheduled in the next couple of years. We think that would be a really good option that is going to help people all across the country.”

But the federal government under President Trump’s administration has so far taken a hard line against legalizing marijuana use. In January, the U.S. Justice Department rescinded an Obama administration policy that had eased enforcement of federal marijuana laws in states that legalized the drug, instead giving federal prosecutors wide latitude to pursue criminal charges.

Republican State Representative Nick Schroer of St. Louis says he plans to propose a resolution in January that urges US Congress to reclassify marijuana or change the part of the federal firearm law to allow gun ownership for medical marijuana users.

Cardetti says its times for Missouri lawmakers in Washington to work on making changes on marijuana laws in the nation’s capital.  “States have tried to go to court to challenge that and they’ve so far been unsuccessful,” said Cardetti.  “So, the real remedy here is that the federal government and the Missouri congressional delegation need to get together and change federal law when it comes to federal law.”