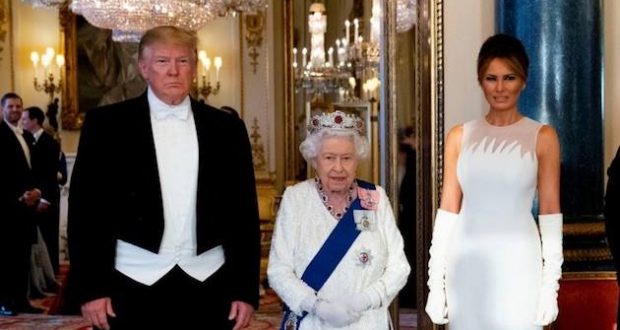 Remarks of Queen Elizabeth and President Trump in Buckingham Palace

Mr President, I am delighted to welcome you and Mrs. Trump to Buckingham Palace this evening, just 12 months after our first meeting at Windsor.

Visits by American Presidents always remind us of the close and longstanding friendship between the United Kingdom and the United States, and I am so glad that we have another opportunity to demonstrate the immense importance that both our countries attach to our relationship.

In the coming days, you will see some of our most treasured historical buildings, speak to the business leaders whose expertise and innovation drive our economies, and meet members of our armed services, past and present.  You will also travel to Portsmouth and Normandy to commemorate the 75th anniversary of D-Day.

On that day — and on many occasions since — the armed forces of both our countries fought side-by-side to defend our cherished values of liberty and democracy.

Mr. President, in your State of the Union Address this year, you paid tribute to some of the American heroes who risked their lives, and we owe an immeasurable debt to the British, American, and Allied soldiers who began the liberation of Europe on the 6th of June 1944.

I paid my first State Visit to your country at the invitation of President Eisenhower.  As Supreme Allied Commander, he had ultimate responsibility for the execution of the Normandy landings.  In his headquarters in St. James’s Square — not far from Buckingham Palace — British and American officers worked closely together to plan the freedom of a continent, and it would be no exaggeration to say that millions of lives depended on their common endeavour.

As we face the new challenges of the 21st century, the anniversary of D-Day reminds us of all that our countries have achieved together.  After the shared sacrifices of the Second World War, Britain and the United States worked with other allies to build an assembly of international institutions to ensure that the horrors of conflict would never be repeated.

While the world has changed, we are forever mindful of the original purpose of these structures: nations working together to safeguard a hard-won peace.

Of course, it is not only our security which unites us, but our strong cultural links and shared heritage.  Every year, there are almost 4 million visits by Americans to the United Kingdom, with a great number claiming British descent.  And with your own Scottish ancestry, Mr. President, you too have a particular connection to this country.

We are also bound by the strength and breadth of our economic ties, as the largest investors in each other’s economies.  British companies in the United States employ over one million Americans, and the same is true vice versa.

Mr. President, as we look to the future, I am confident that our common values and shared interests will continue to unite us.  Tonight, we celebrate an alliance that has helped to ensure the safety and prosperity of both our peoples for decades, and which I believe will endure for many years to come.

Ladies and gentlemen, I invite you all to rise and drink a toast to President and Mrs. Trump, to the continued friendship between our two nations, and to the health, prosperity, and happiness of the people of the United States.

Your Majesty, Melania and I are profoundly honored to be your guests for this historic State Visit.  Thank you for your warm welcome, for this beautiful weather — (laughter) — your gracious hospitality, and Your Majesty’s nearly seven decades of treasured friendship with the United States of America.

This week, we commemorate a mighty endeavor of righteous nations and one of the greatest undertakings in all of history.  Seventy-five years ago, more than 150,000 Allied troops were preparing on this island to parachute into France, storm the beaches of Normandy, and win back our civilization.

As Her Majesty remembers, the British people had hoped and prayed and fought for this day for nearly five years.

When Britain stood alone during the Blitz of 1940 and 1941, the Nazi war machine dropped thousands of bombs on this country and right on this magnificent city.  Buckingham Palace alone was bombed on 16 separate occasions.

In that dark hour, the people of this nation showed the world what it means to be British.  They cleared wreckage from the streets, displayed the Union Jack from their shattered homes, and kept fighting on to victory.  They only wanted victory.

The courage of the United Kingdom’s sons and daughters ensured that your destiny would always remain in your own hands.
Through it all, the Royal Family was the resolute face of the Commonwealth’s unwavering solidarity.

In April of 1945, newspapers featured a picture of the Queen Mother visiting the women’s branch of the Army, watching a young woman repair a military truck engine.  That young mechanic was the future Queen — that great, great woman.  Her Majesty inspired her compatriots in that fight to support the troops, defend her homeland, and defeat the enemy at all cost.

We also pay tribute to Prince Philip’s distinguished and valiant service in the Royal Navy during the Second World War.

On D-Day, the Queen’s beloved father King George the Sixth delivered a stirring national address.  That day, he said, “After nearly five years of toil and suffering, we must renew that crusading impulse on which we entered the war and met its darkest hour…Our fight is against evil and for a world in which goodness and honor may be the foundation of the life of men in every land.”

This evening, we thank God for the brave sons of the United Kingdom and the United States who defeated the Nazis and the Nazi regime, and liberated millions from tyranny.

The bond between our nations was forever sealed in that “Great Crusade.”  As we honor our shared victory and heritage, we affirm the common values that will unite us long into the future: freedom, sovereignty, self-determination, the rule of law, and reverence for the rights given to us by Almighty God.

From the Second World War to today, Her Majesty has stood as a constant symbol of these priceless traditions.  She has embodied the spirit of dignity, duty, and patriotism that beats proudly in every British heart.

On behalf of all Americans, I offer a toast to the eternal friendship of our people, the vitality of our nations, and to the long, cherished, and truly remarkable reign of Her Majesty the Queen.  Thank you.

Previous: Former Governor Brownback to be honored with Mahatma Gandhi Award
Next: Political historian thinks voters will stand by Trump in 2020