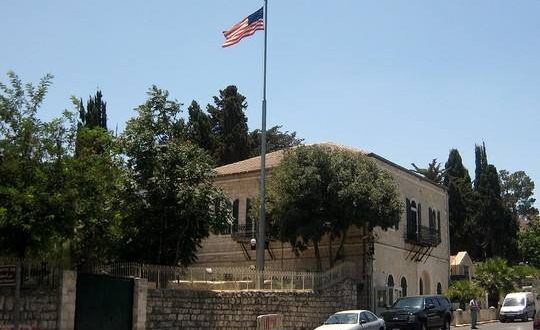 The new U.S. Embassy in Jerusalem.

The grand opening of the U.S. embassy in Jerusalem may have a special guest: President Donald Trump–the man who made it possible in December.

Trump was asked during a joint press conference with Germany’s Chancellor Angela Merkel Friday if he and members of his family planned to fly out for the historic opening.

Treasury Secretary Steve Mnunchin will reportedly lead a 250-strong VIP delegation from the United States, though President Trump did not confirm that to Kennedy in the White House East Room.

Last year, the president recognized Jerusalem as Israel’s capital, launching plans to move the US Embassy there.

“Jerusalem has been promised for many, many years by presidents,” said Trump. “They all made campaign promises and never had the courage to carry it out. I carried it out.”

President Trump says he was first presented with a proposal for a $1 billion embassy but questioned the cost.

But after talking with US Ambassador to Israel David Friedman, Trump says he discovered it could happen for less than half a million dollars.

“We have a building; we have the site; we already own the site; we own the building,” said Trump. “I can take a corner of the building and for $150,000 we can fix it up, make it beautiful and open our embassy and instead of 10 years from now, we can open in three months.”

A ribbon-cutting is being planned for May 14 to mark Israel’s re-establishment as a country 70 years ago.

Previous: NFL Cheerleader Claims She Was Discriminated Against for Her Faith and Virginity
Next: Former FBI agent who investigated Greitens pleads 5th under oath