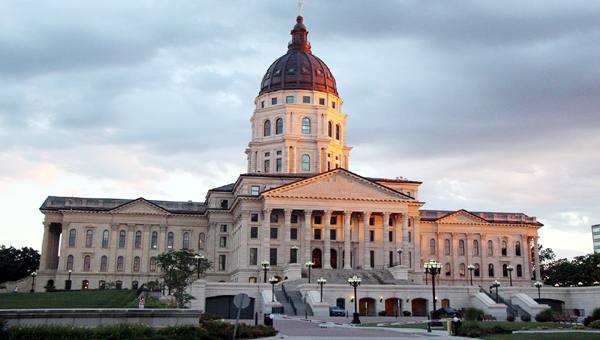 For years now, legislators in the State of Kansas have been paying nervous tribute to the Kansas Supreme Court. As reported by the Kansas Policy Institute, the Kansas House developed a school funding plan in late March that proposes to give schools a bump of $500 million in educational spending over five years to pacify the Supreme Court. The House passed this bill on Tuesday afternoon.

So far Republican Senate leaders are proving to be of sterner stuff. They have proposed a constitutional amendment that would “declare the power to appropriate funding for education is exclusively a legislative power and not subject to judicial review.” They don’t want to appease the beast. They want to render it powerless.

Republican Senate President Susan Wagle and Majority Leader Jim Denning refused to move forward on the $500 million tribute. “It spends money that we don’t have, and they’re trying to pay for it with gimmicks,” said Denning, R-Overland Park. “We’ve been pushed into a corner,” said Wagle, R-Wichita. “Kansans can’t afford the bill that the House just passed.”

The additional $500 million includes an increase in special education funding, but most would go to an increase in base state aid. KPI argues that the House plan cannot be enacted without a tax increase in the near future, “especially if legislators supporting it hold true to their definition of a fiscally sound budget.”

The appeasers are horrified that someone would choose to fight rather than offer more tribute. “Wagle and Denning are acting like school-yard bullies,” Senate Minority Leader Anthony Hensley, a Topeka Democrat, told the Kansas City Star. “This tactic is not going to result in the passage of a constitutional amendment. Instead, it will result in the closure of our state’s schools.”

A special GOP-controlled Senate committee on school finance approved its own bill Tuesday that would phase in an increase of $274 million over five years while targeting much of the new money to early childhood education.

Kansas Secretary of State and gubernatorial hopeful Kris Kobach on Wednesday praised Senate GOP leadership who are blocking school finance legislation until passage of a resolution for a constitutional amendment.

“It is time for the people of Kansas to terminate the endless cycle of K-12 finance litigation trapping our state,” Kobach said in a statement. “We need a constitutional amendment prohibiting unelected judges from hijacking the Legislature’s power to make funding decisions.”

If the resolution clears the Legislature, the constitutional amendment would be placed on the general election ballot in November.

Kansas Attorney General Derek Schmidt also supports putting the issue before Kansas voters, as does much of the Republican base.

Rep. Chuck Weber, a Wichita Republican, pointed to a common sense compromise. “Some of us,” he said, “would be willing to pay that price, a high price on the school finance if we can get the constitutional amendment to end this cycle of lawsuits.”

There is no guarantee that even the $500 million in tribute would keep the schools open. Last year, the Supreme Court rejected the package proposed by the Kansas legislature and may do so again.

“The vested interests will fight to retain the status quo,” Kobach said, “but it’s time to give the people of Kansas the opportunity to vote on a constitutional amendment.”